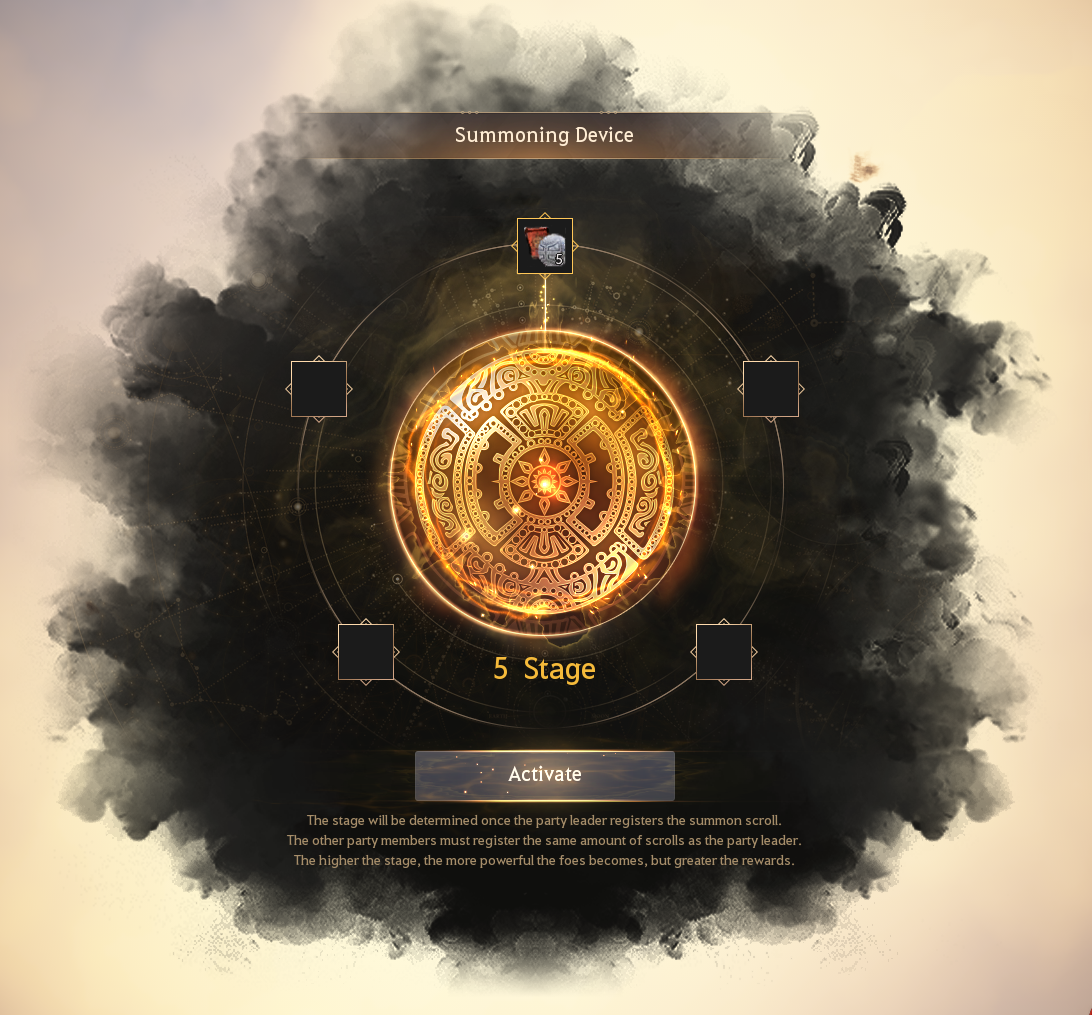 * The summon scrolls can still be used in the old method where the party leader just summons the boss.
- The Faded Ancient Relic has up to five different "stages" in which monsters can be summoned. The different amount of scrolls and recommended AP per stage are as follows.

* The difficulty of the boss is determined by the number of scrolls used regardless of the size of your party. In other words, we strongly recommend you bring as many party members as you can.

For example,
the Stage 1 boss summoned by one person registering one summon scroll versus one party of five members registering one summon scroll each will be of the same difficulty level.
Therefore, bringing as many party members as you can will greatly increase the efficiency of taking down these bosses.
- The higher the stage, the more powerful the foes, but the amount of rewards remains the same.
- Using this revamped method of summoning these bosses has a low chance to spawn monsters who are [drawn to the Ancient Relic].
* Defeat these monsters to obtain additional loot.

The Black Desert summon scroll content, a.k.a. the "Disco Ball," was one of the better means of acquiring enhancement materials such as Memory Fragments. However, the amount of time spent waiting for the boss to appear was greater than the actual time spent taking the boss down. Thus we've thought over many ways to make the process more interesting, but felt it somewhat lacking to simply reduce the summoning time to "summon a powerful boss and obtain loot, " and thus decided to go with using a greater amount of summon scrolls to summon a mighty foe.
This new method is similar to the "combine the (dagger) keys" method from Atoraxxion's "Sol Magia," where you can pick your own difficulty and potential rewards that scale up to Stage 5 (which will require 5 scrolls each). While not included in today's update, we plan to implement a similar scaling system for the scrolls obtained by combining Forbidden Books and Scrolls Written in Ancient Language as well.
● Changed party special deals so that the effect "+30% Silver Collection upon Central Market Sales" can be applied when you have an active Value Pack buff.
- You can adjust the settings for special deals by pressing the cogwheel-shaped icon on the upper left of the party widget.
- Added an icon that allows you to check whether or not the Value Pack buff is active on the area of the screen where you can adjust settings on the upper part of the party widget.

We developed the Party Special Deal as a quality-of-life feature for Adventurers who enjoy forming parties to defeat monsters together. However, we received feedback from Adventurers in NA/EU saying that items sold through this feature didn't benefit from the Value Pack's effect, resulting in lower earnings which discouraged Adventurers from using it.

Now, thanks to NA/EU Adventurer feedback, we've decided to allow the Value Pack to apply to Party Special Deal sales. Furthermore, we added an icon to help better identify when the effect is active. With this, we hope more Adventurers will party up to defeat the monsters of Black Desert. 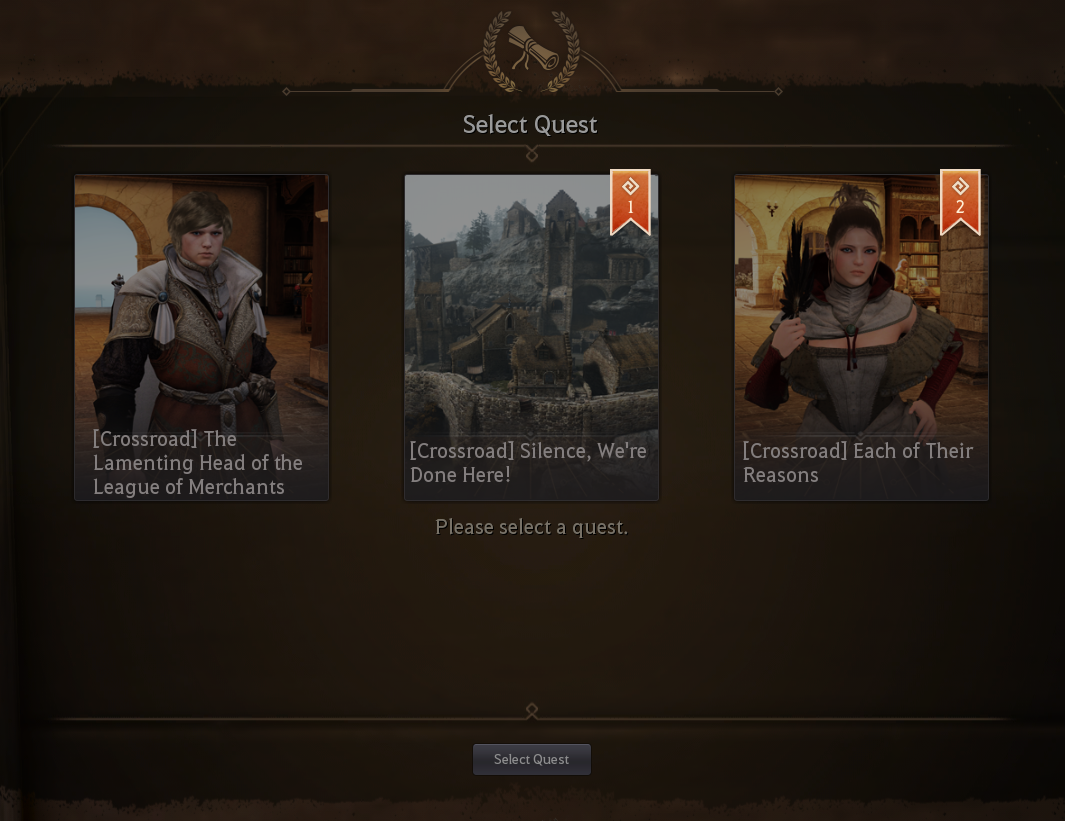 While adventuring in the world of Black Desert, you will reach Crossroads quests in the main storyline that will introduce you to different NPCs and bits of story based on the choices you make. For adventurers who've created new characters or are trying to complete quests to obtain knowledge for Adventure Logs, or are simply in the mood to seek out new and never before experienced Black Desert storylines, this update will make it easier to discern exactly how many times you've chosen a specific route in a Crossroads quest, thus making it easier to access the various storylines of Black Desert.
● Changed the finishing dialog of the [Repeat] Exterminate the Nagas quest.
● Changed the NPC for completing The Origin of the Powerful Energy quest and the NPC for accepting the [Awakening] Bree Tree Ruins quest.

It's been 3 weeks since we introduced the Node Wars revamp, and while many Adventurers have been playing the updated Node Wars without too much difficulty, we've also heard a lot of feedback saying that it was too much of a jarring change. Many of our Adventurers in NA/EU were quite vocal with their feedback, especially in regards to "removing the limits on the number of participants," "stat limits," and "designated days." In response, we want to give some insight into our intentions behind the update, and, at the same time, we do believe we need to better reflect your feedback as we work to further improve Node Wars from here on out.

Initially, we set the number of Node War participants to 100 to implement a "war game" style of gameplay for the revamped Node Wars. We hoped to provide guilds that might be a bit outclassed a way to use their numbers tactically against opponents who may have spread themselves too thin by occupying several nodes. However, we saw many concerns for how abrupt the gameplay changes were, and the actual data lent credence to these concerns when we identified that most guilds were participating with less than the intended 100 participants. As a result, we decided to adjust the participant limit to more appropriate numbers that better reflect the current data. (Do note that these limits are not set in stone and may see some adjustments depending on the future flow of the Node Wars.)

As for stat limits, we hoped to create opportunities for more guilds to participate in Node War, but we heard feedback claiming that the limits discouraged Adventurers from progressing and strengthening their characters -- as well as being disadvantageous to guilds that occupied multiple nodes in the current "war games" style. Thus, we've decided to remove the stat limits for now and continue to carefully monitor the ongoing Node Wars.

Lastly, many of you expressed your opinions about the "designated days" of Node Wars. And so, to allow a greater number of Adventurers to participate, we extended the current Node War days from three to five. Furthermore, after receiving feedback that the original days of Sunday to Thursday that was announced on the Global Lab weren't flexible enough for many to join, we settled upon the days of Sunday, and Tuesday to Friday to encourage even more NA/EU Adventurers to jump into the battlefields of Node Wars.

Once again, we would like to thank all our Adventurers who shared their valuable feedback with us. We will continue to do our best to listen to your feedback. Thank you!
● Changed the days available to participate per territory.
● Changed the node tiers determined by territory.
- Mediah Territory becomes a Tier 2 node, Valencia Tier 3, and Calpheon and Kamasylvia both become Tier 4 nodes.
● Changed the maximum number of participants allowed per Node War tier.
- Whereas up to 100 participants could take part in Node War tiers 1-4, the following limits have been implemented.
● With the changes to Node War tiers and the added limits to the number of participants, we proceeded with resetting the Node War Occupation Information and removed installed forts and annexes during Nov 10, 2021 (Wed) maintenance.
- Taxes that weren't collected due to the reset occupation information will be issued during Nov 17, 2021 (Wed) maintenance.
- Please note that you will need to have succeeded in occupying a node of tier 1 or higher between Nov 10, 2021 (Wed) and Nov 12, 2021 (Fri) in order to participate in the Node Wars on Nov 13, 2021 (Sat).
● Changed the reward received upon becoming a Lord of a Territory and achieving victory in Conquest Wars via the points system.
- Glorious Victor Reward will be awarded to guilds that win the Conquest War by destroying all enemy forts before the end of Conquest War.
- Burning Spirit Victor Reward will be awarded to guilds that win the Conquest War by the amount of points they have at the end.

Many Adventurers are giving their all on the battlefield to rise victorious during this Conquest War Pre-Season. However, with the introduction of the point system to Conquest Wars, we have listened to our Adventurers who have said that it seemed pointless to keep fighting when the rewards were the same for winners that destroyed all the forts and winners that won by points. Therefore, we have decreased the rewards awarded to winners that win by points to make the reward for winners that destroy all the forts even more enticing. There isn't that significant of a difference between the two rewards, however, we hope it's enough to encourage you to keep fighting it out to the very end.
● Improved the system message to display the family name of the Adventurer that destroyed the fort/command post/field HQ during Node/Conquest War.

We have added the Adventurer's family name to be displayed on the message so all may know which guild member dealt the glorious final blow to the enemy fort.

● Added the UI that allows you to recruit party/platoon members from within the guild easier.
- You can create a party/platoon through the Guild (G) window by clicking on the Party/Platoon Recruitment button.
* The created party/platoon will only be displayed to your guild members. 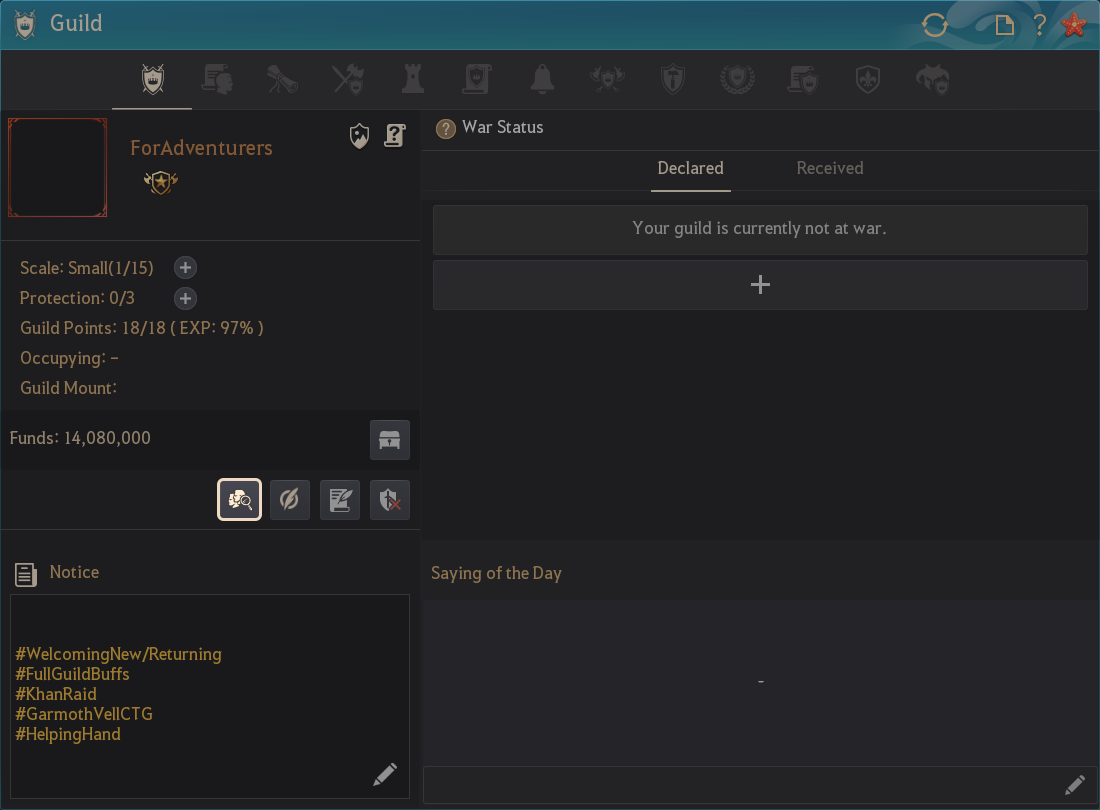 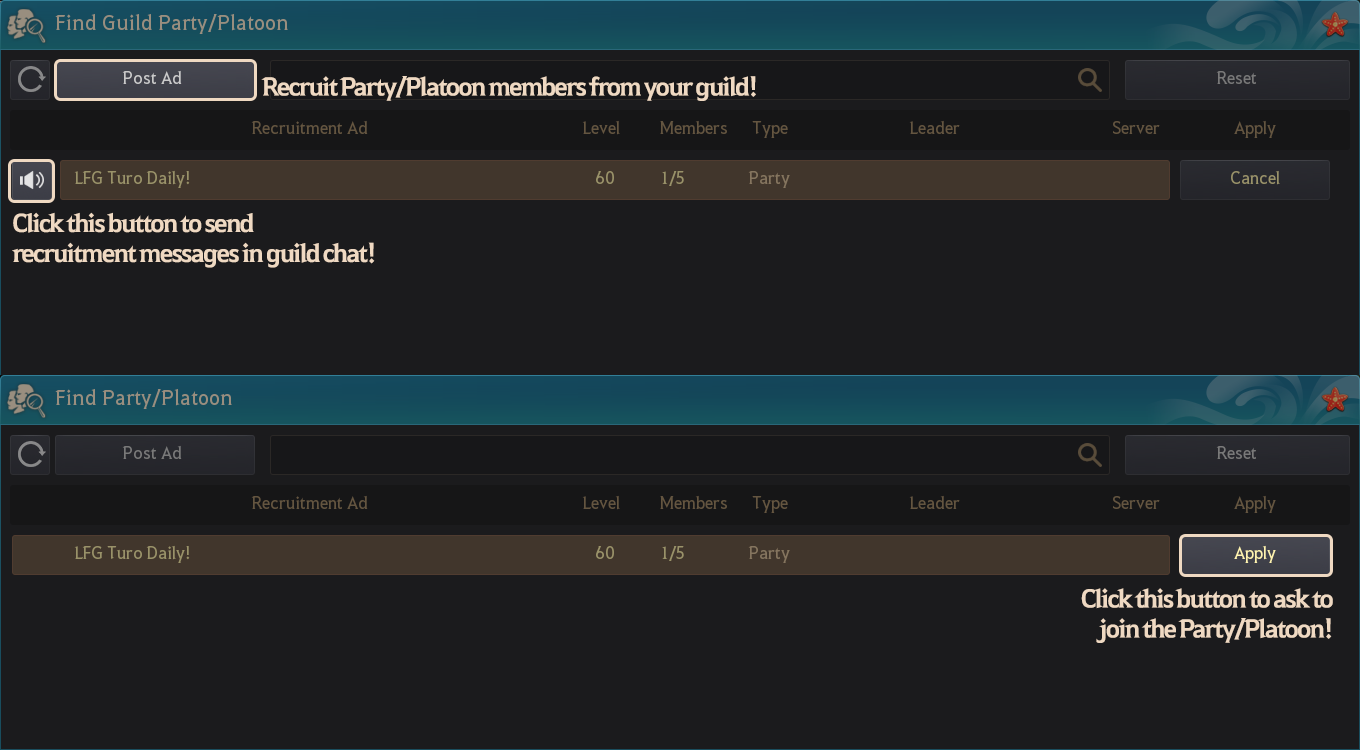 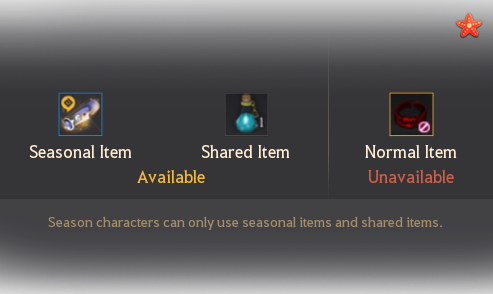 ● Added and changed the following for the Progression Pass on the gamepad UI.
- Added an in-game banner on the right-hand part of the menu that will enable you to check and use the Progression Pass.
- Added a function that allows you to check notifications through the Progression Pass icon on the upper right of the in-game screen when Progression Pass content is first available, or when there are rewards you can obtain from completing Progression Pass objectives.
● Fixed the issue where the text goes beyond the UI space on the Select Dye (J) window.
● Added a function that allows you to check the writer of the post when you hover your mouse over the scroll that takes you to the Adventurer's Board from the Progression Pass UI.
● Realigned the icon on the Guild Info button on the Guild window (G) to be centered.
● Changed the "Navigate" text to "Navigate/Cancel", which is displayed on the key guide in the bottom right corner of the World Map in gamepad UI mode.
● Changed the Settings UI to be hidden for a moment when showing the preview of the Simple Settings by PC Specs UI.
● Reverted the loading screen to the previous image.
● Reverted the Halloween clip that plays in the background for log-in and server selection screens back to the previous clip.
● Expanded the area on the Season Special Gift UI where the description is.
● Adjusted the location of the description text on optimization displayed on the Settings (ESC) UI.

● Adjusted the times for World Bosses, Node/Conquest Wars, and Tribute Wagons by 1 hr on the NA server as the daylight saving ended.

● Changed to display a notification if you enter the wrong password 10 times or more in Spanish.
● Improved to send a notification pertaining to your account to your alternative email as well when you have registered an alternative email.
● Improved to display failed log-ins on the Recent Login page on the Black Desert official website. Also, certain texts were changed and added.
● Improved a part of the UI on the Purchase Acoin page on the Black Desert official website.
● Fixed the issue where the nickname and date would be displayed abnormally on the Beauty Album page in the mobile environment.
● Fixed the issue where your current page would move as well when opening a post in a new page by pressing Ctrl + LMB on the list in the Updates page of the Black Desert official website.