Here are the latest update details for Black Desert Online on May 25, 2022 (Wed). Today’s patch contains 74 updates and is approximately 930.15 MB.

We're adding Marni's Realm (private monster zones) as we revealed during CalpheON Episode 2. The concept of private monster zones came to fruition after we thought about how to improve the gameplay experience for our Adventurers who had limited time to play each day.
We first brought this concept to life in the form of a "mini" server, but we felt that version was difficult to balance and didn't offer an equal opportunity access for all Adventurers. Hence we've come to develop and reveal Marni's Realm - Private Monster Zones. Of course, up until we settled on this current iteration, we went over countless feedback and opinions from our Adventurers, which helped us immensely. We're just happy to be able to finally reveal the fruits of our labor.
Marni's Realm does not apply to all monster zones, and we also focused on most popular zones sought after by our Adventurers, such as those in the Elvia Realm, Sycraia Underwater Ruins, and Gyfin Rhasia Temple.
It's quite simple to use. You will need to first move to the designated spot in a monster zone, open up the special menu and click a button to enter. Please note that we limited Marni's Realm to certain parts of a monster zone in order to lessen the burden on each server.
For example, upon entering Marni's Realm at the Orc Camp, you'll find yourself only able to move around and fight monsters in the "best spot" of the monster zone. Since you will be the only Adventurer in said realm, we didn't feel the need to open up the entire monster zone for Marni's Realm.
Also, your usage of Marni's Realm is limited to 1 hour per day.
While we heard your initial feedback on 1 hour being somewhat short, we didn't want Marni's Realm to end up overshadowing the main content of Black Desert, that is, fighting monsters in the open world alongside other Adventurers. Therefore, we have no plans to increase the daily limit at this time.
● Added private monster zones, Marni's Realm.
- The presence of all other Adventurers are removed the instant you enter Marni's Realm.
- Marni’s Realm spawns all the same monsters with the same loot rates as the "normal" zone.
- You cannot go beyond the pocket of the monster zone within Marni's Realm unless you press the button to leave.
● You can find the available monster zones for Marni's Realm under Menu (ESC) - Adventure (F5) - Private Monster Zone.
● The entry button to Marni's Realm will appear once you reach the designated spot of specific monster zones, which you must press to gain access.
- You can auto-navigate to these designated spots also by referring to Menu (ESC) - Adventure (F5) - Private Monster Zone.
* Auto-navigation is not provided to monster zones in the desert.
- Entry to Marni's Realm is limited to 1 hour per day, which resets at 06:00 daily (an additional 5 minutes is provided as a buffer).
- As long as you have time remaining, you can enter and leave Marni's Realm as you please.
- Leaving Marni's Realm will pause the daily time limit, but there will be a 5-minute cooldown before you can attempt to enter again.
- You can only access Marni's Realm for Elvia monster zones on an Elvia Realm server.
- You can toggle the Marni's Realm entry button from the respective private monster zone window.

Improvements to All Monster Zone Rewards and Item Drop Rates

We have several large updates going live for official Black Desert servers to announce today.
First off, we are adding traits unique to each monster zone for all regions (excluding Balenos, Serendia, and Mediah territories).
Based on recommended AP levels, these unique traits will include efficient Agris Fever point usage, higher drop rates for Specter's Energy, and higher Combat and Skill EXP rates within these zones. With this update, we hope to provide a broader variety of choices that will meet the diverse goals of our Adventurers as they head off to a monster zone.
We're also adjusting the loot tables of each monster zone.
Rather than adding new items to existing loot tables, we've taken the approach of looking at the overall balance of item drops and making adjustments where needed. Since we focused mostly on bolstering loot tables of zones that were slightly underwhelming, this update is expected to maintain or slightly increase profits from defeating monsters. For example, in the case of Cadry Ruins, which dropped Black Stones and Rosar Weapon Boxes, we slightly decreased the drop rate of Rosar Weapon Boxes and increased the drop rate for Caphras Stones and Scroll Written in Ancient Language, which we expect will slightly increase your gains from this zone. For Hystria Ruins, we made one of the zone's signature loot drops, the Ancient Power - Black Shard, now drop from Elten and Tukar Balten as well. These are the kinds of profit-increasing changes we implemented to balance out the differing loot tables between monsters and thereby increasing the potential for profit in most monster zones.
We're also expanding the means to obtain even greater item drop rate buffs than before.
Family Fame will now also add an additional item drop rate buff, and we've increased and expanded the influence of the item drop rate buff gained from Ecology Knowledge. This change was made so that Adventurers would gain a sense of naturally benefiting from all the hard work they’ve put into playing the game.
In addition, we are raising the maximum item drop rate threshold to 400%.
You can reach up to Item Drop Rate +300% through various means such as scrolls, campsite buffs, ecology Knowledge benefits, in-game events, and Blessing of Kamasylve. Owning a territory will bump that Item Drop Rate up to +350%, and if playing on an Arsha server, you will reach the maximum possible item drop rate of +400%. On a side note, item drop rate buffs such as the Hot Time event will now also apply on Arena of Arsha servers.
Some of you may have different opinions regarding the means of reaching the maximum item drop rate threshold. However, we settled on this updated system while considering how difficult it was to previously reach Item Drop Rate +300% without special event buffs or scrolls. We will continue to work on providing greater means of obtaining these buffs, so we ask for your patience and understanding.
This update to monster zones is part of our ongoing efforts, including the Elvia Realm monster zone improvements and the introduction of Marni's Realm, to offer more PvE choices to our Adventurers, just as we had announced during the previous Calpheon Ball.
We worked long and hard to provide these updates in a timely manner and will continue to work hard in order to give all of our Adventurers the best possible gaming experience.
Thank you.

● The following zones gained the trait of having a higher chance to drop Caphras Stones compared to other zones of similar recommended AP levels.

● The following zones have had their Combat/Skill EXP gains increased from defeating monsters.

● The following zones have seen the value of junk loot obtainable by looting monsters in Kamasylvia and Drieghan territories increased.
* These changes in value will not be applied to junk loot obtained prior to May 25 (Wed) maintenance.

● Added weekly subjugation quests that grant a substantial amount of Contribution EXP.
- The Contribution EXP reward will automatically be issued upon quest completion based on your current Contribution Point level.
- You can complete the following weekly quests in each monster zone.
* The above quests are not affected by the increased Contribution EXP gains of the Caphras - Journal of Glory/Elion - Tome of the Sun.
● Improved Narc's Crimson Tear to now also be obtainable from Manshaum Great Warriors at Manshaum Forest.
- "Narc's Crimson Tear" was added so that it can be looted from defeating Manshaum Great Warriors.
- The Item Drop Rate for "Narc's Crimson Tear" that you can loot from Manshaum Shaman was slightly decreased.
* The drop rate of Narc's Crimson Tear slightly increased with the application of the changes listed above.
● The Item Drop Rate was increased for "Sherekhan's Panacea" and "Dragon's Fang" lootable from defeating monsters at Sherekhan Necropolis (Night).
● Improved to be guaranteed one "Embers of Frost" that you could previously loot according to a set probability when defeating "Wanewinter Guardian" Erebjork.
● Applied the following changes to the attack patterns of Mirumok Watchers and Mirumok Lookouts at the Mirumok Ruins:

● Changed to be able to move to Vaha's Garden via the Sol Magia when in possession of the Lucretia Dagger in Atoraxxion: Vahmalkea.

● Changed Roroju's weekly Cooking quest to now reward you with a Cooking Box left over from Imperial Delivery in Arehaza upon completion.
- Changed [Weekly Professional to Master Cooking] Unforgettable Cooking I to II quests to now reward you with 4 to 5 Professional to Master Cooking Boxes depending on your quest.
● Changed the Wandering Alchemist Dalishain's [EXC] Recycling Unwanted Lightstones quest to now make it easier see the lightstone you are handing over.
- The names of the lightstones will be displayed when you interact to hand them over.
- e.g. When in possession of the Lightstone of Fire: Aerial: "Hand over the unwanted Lightstone of Fire: Aerial."
● Added a text that describes how you cannot accept multiple [Crossroad] quests at once to the quest summaries of the "[Crossroad] [Life Skill] Partner Qualifications" that you can accept from Puteaux in Eilton.
● Fixed the issue where you couldn't obtain Knowledge from Feinia at the Western Guard Camp under certain circumstances.
- If you couldn't previously obtain the Knowledge from her, speaking with Feinia will now allow you to obtain it.
● Changed the following monsters that had their HP displayed regardless of whether Knowledge was obtained to be properly affected by Knowledge:

● Extended the period for the quest where you can exchange the [Event] Brave Warrior's Token for the Enhancement Help Kit II until Jun 15, 2022.

● Added a new UI theme, Spring, that portrays the spring spirit of Shai and alpacas.
- When you first log in, the UI to select and apply the new UI theme will be displayed. 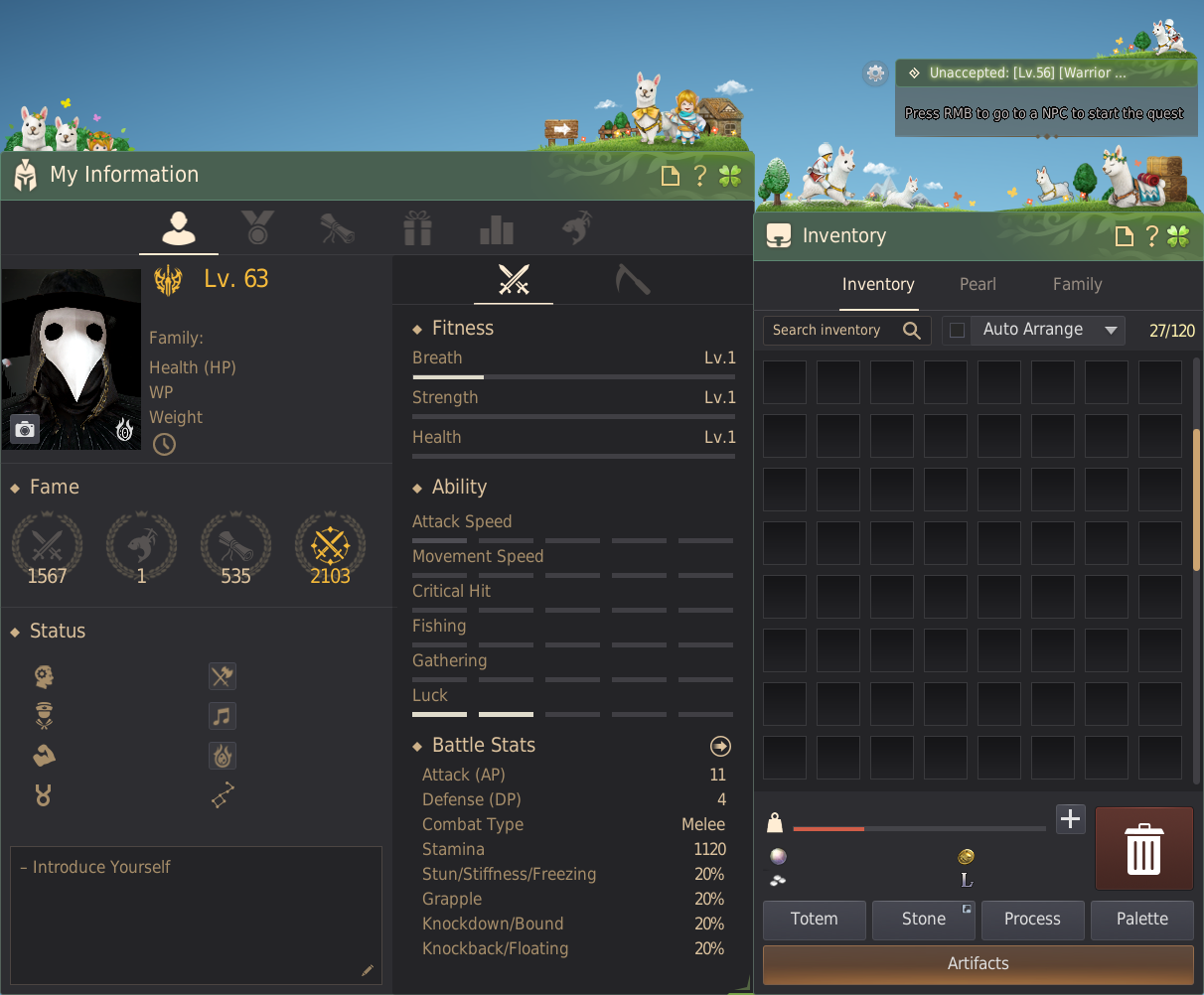 ● Improved the classes and slots that you can see from the Select Character, Create Character, and End Game UIs.
- The number of slots available on the Select Character window will be displayed. Also, a Create Character button was added to the bottom of the list of characters.
- Hovering your mouse over classes you've already created will now display the text "Owned" in the Character Selection UI of the Create Character window.
- The empty slots displayed on the End Game UI were changed to be displayed only for the number of characters you can currently create.
- A function was added that that allows you to conveniently purchase a Character Slot Expansion Coupon from the last character slot at the selection screen if extra character slots are available.
● Added a text regarding Fire Horn and Powder of Ascension to the part about special gathered materials included in the details displayed when you hover your mouse over Tanning from My Information (P) -> Life Info -> Learn More -> Gathering -> Tanning.
● Changed the Artifact Inventory so you can only enter up to 20 artifacts/lightstones, which is the maximum amount you can take out at any given moment.

● Alleviated the issue where there would be delays in connecting to servers under certain circumstances.

● Changed the following terms in English:
- Bravery Token to Token of Bravery.
- Tooth of a Blood Wolf to Blood Wolf Tooth.