"FREEDOM... to fight!"
The preseason for the Arena of Solare begins with today's update.
It's the first-ever 3 vs 3 PvP arena in Black Desert where all players battle for victory with equalized gear.
We will later let you know of our future plans for this content little by little.
I hope you can start enjoying PvP in Black Desert from today as you battle freely. 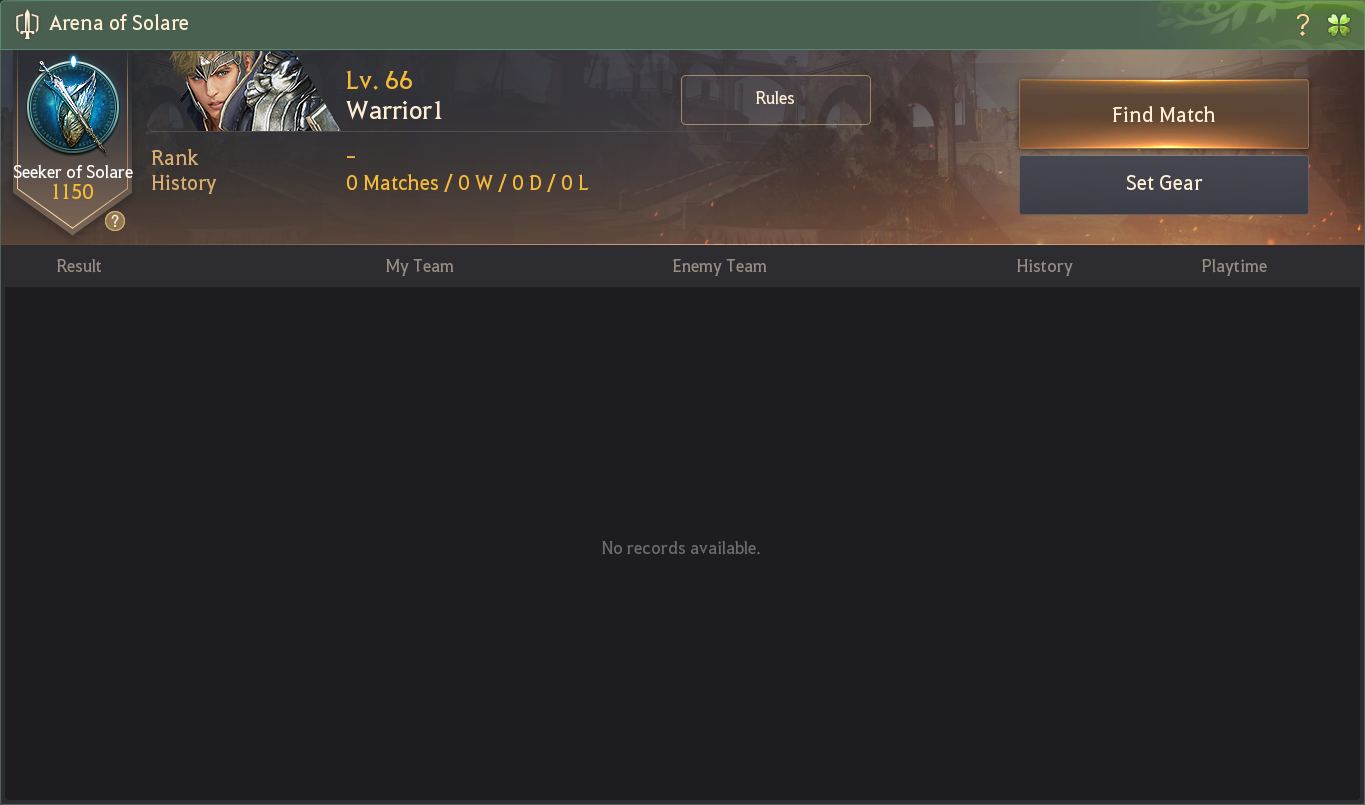 ● You can participate in the Arena of Solare from Lv. 60 with a character who has completed their Succession/Awakening questline.
- Press the "Find Match" button from the Arena of Solare menu for auto-matching.
- You will automatically enter the battlefield if all 6 participants accept after matching is complete.
- You can only start matching after equipping the exclusive gear.

* Trial and Season Characters cannot participate in the Arena of Solare. 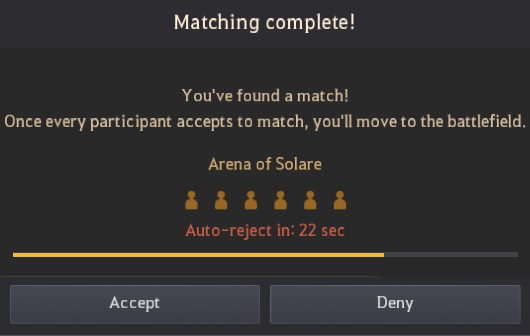 ● Adjust your exclusive gear loadout via the "Set Gear" feature from the Arena of Solare menu.
- You can select the gear you want to equip for the battlefield and also select crystals you want to equip on your gear from the "Set Gear" window.
- Early on, you have access to basic gear and crystals. You can later use "Seals of Solare" that you get once a match ends to unlock a variety of other gear and crystals. 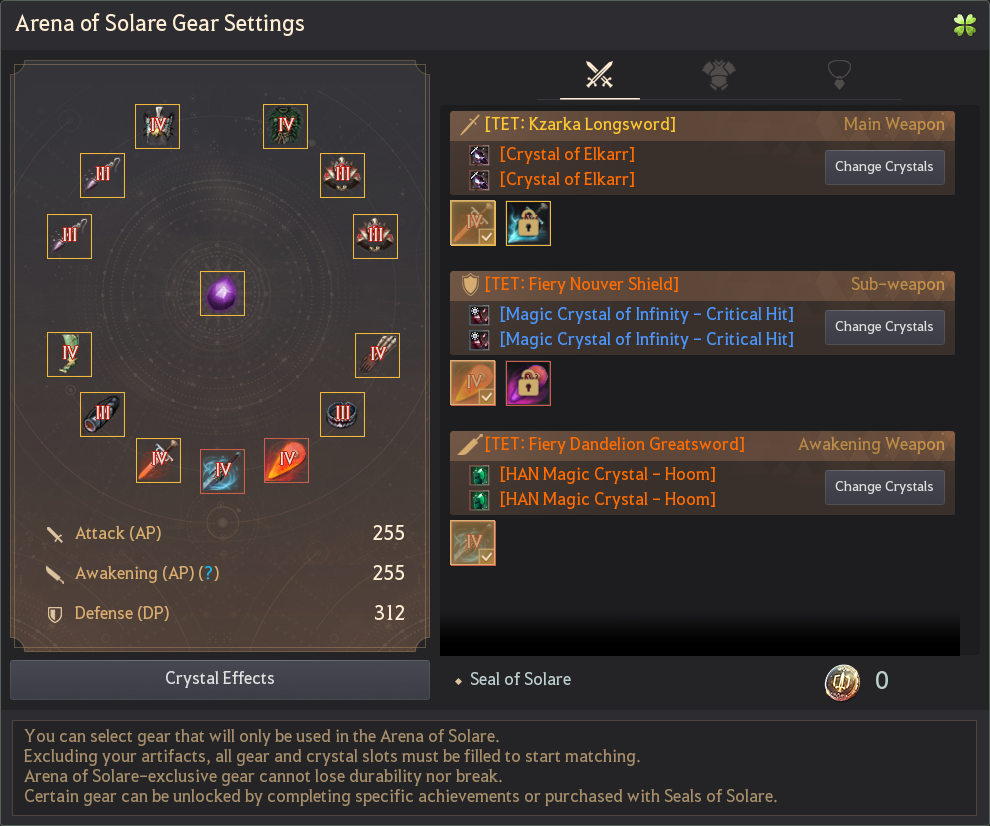 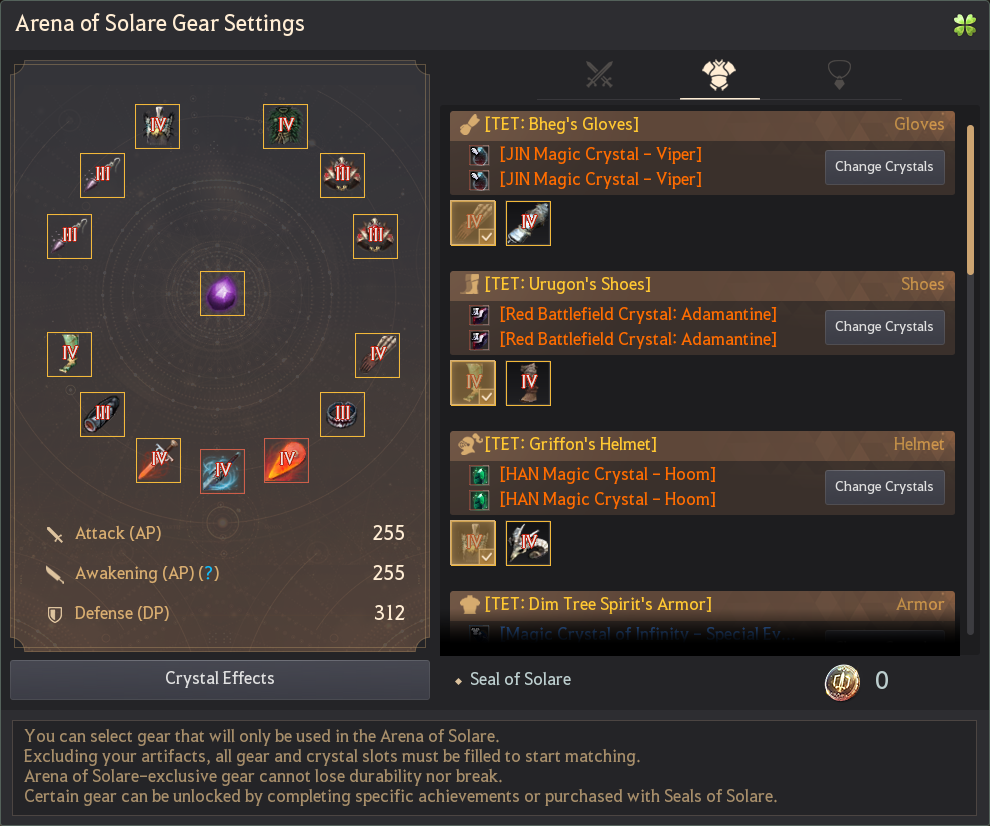 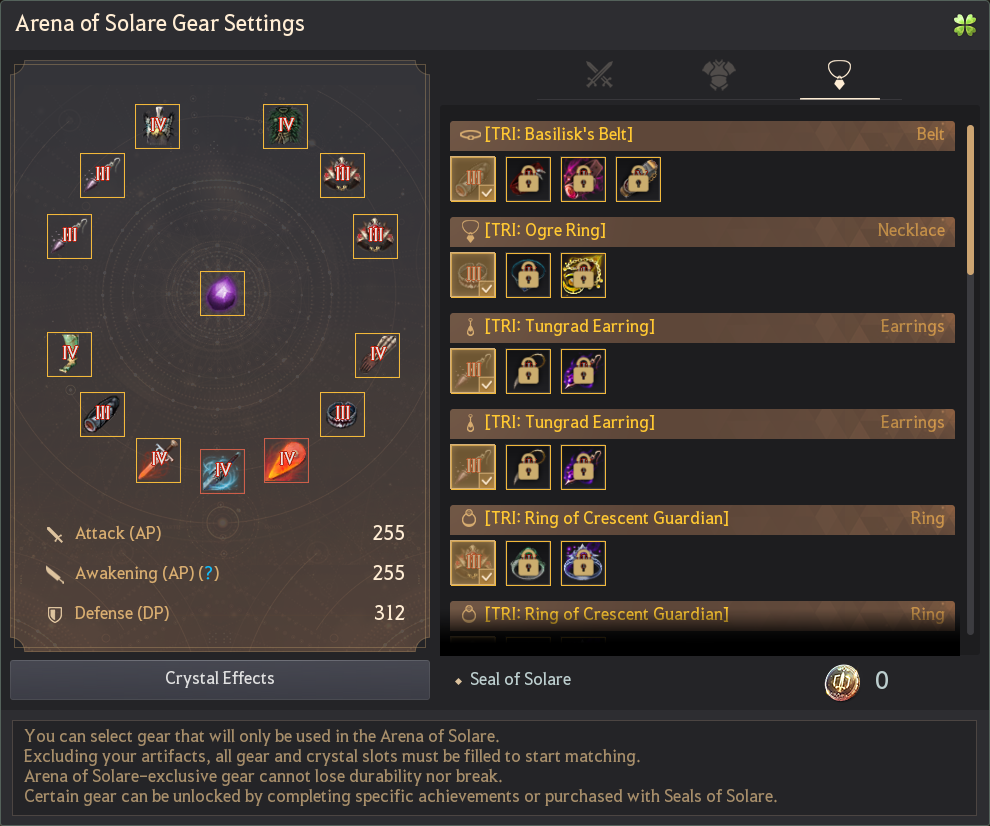 ● For the Arena of Solare matches, the team with the best 3 out of 5 will win. You'll get a maximum of 3 minutes per round.
- The team with the higher total HP among the surviving members will win when the match ends.
- If the total HP is the same, the team with a higher total damage wins.
- The match will conclude in a tie if the total HP and total damage of both teams are the same.
● In the Arena of Solare, not only will you be provided with exclusive gear, but you also cannot use potions, meals, elixirs, etc. Also, the effects of certain skills will be adjusted.
- The stats for the Arena of Solare exclusive gear will be applied instead of the stats of the gear currently equipped to your character.
- You cannot use any type of potions. However, your character's default HP/MP/WP/SP recovery will greatly increase.
* The amount naturally recovered within the Arena of Solare will be similar to the recovery amount you get from using Ornette's or Odore's Spirit Essences with a Fairy that's acquired the skill "Miraculous Cheer V."
- Using skills that recover HP within the Arena of Solare battlefield will recover only half the amount normally recovered.
- In the Arena of Solare, the Guard Gauge, a defensive feature of all classes, will be equalized across classes.
- The AP, Damage Reduction, Accuracy, and Evasion stats will be halved for all characters.
- The remaining time for the effects of meals, elixirs, and perfumes will not be wasted. Their effects will instead be nullified and their time remaining paused while within the Arena of Solare if you used the items before entering. The effects will be applied again and the remaining time will resume being consumed upon returning to the previous location after the match's conclusion.
- The stats for your character's max HP will increase by 2,000 and your character's Critical Hit Rate, Attack and Casting Speed, Movement Speed will be at Lv. 5 while in the arena.
- Upon entering the battlefield, Black Spirit's Rage, HP, MP, SP, WP, cooldown, and other supplementary resources will all be recovered.
- The cooldown for Emergency Escape will reset each round.
- The "traces of elements" buffs for skills, exclusive gear, and the battlefield will only be applied in the arena.
- The Total Family Bonus from Adventure Journals will not be applied.

● You'll randomly enter one of the three battlefields for the Arena of Solare.

● Your points will fluctuate depending how you perform in the Arena of Solare. You will be awarded an Emblem of Solare based on your point bracket. 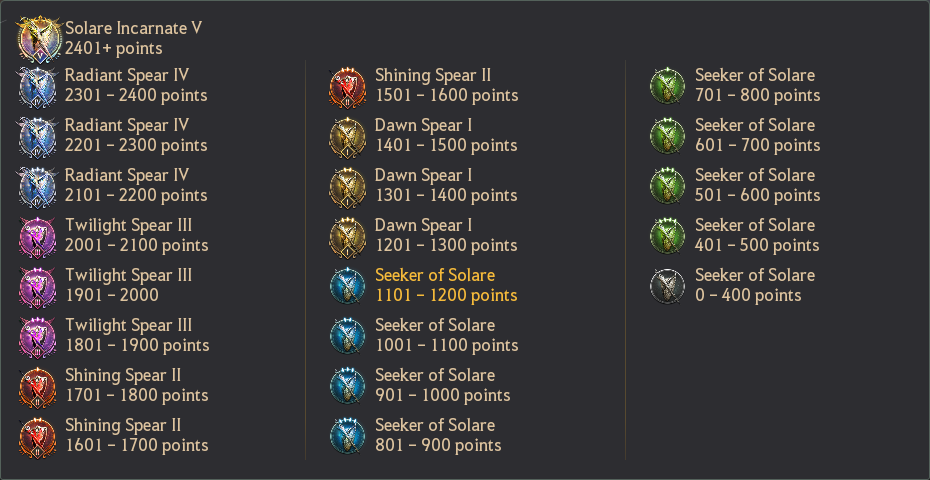 ● You can only use matchmaking during the following hours in the Arena of Solare preseason.

* [Find Match] is unavailable outside of the above time frame.
* The matchmaking available time period may change during the preseason.

* For more information, please refer to the Adventurer's Guide - [Arena of Solare].

Valentine's Apprentices, Liana and her twin brother, Ludowig, have come up with an incredible invention.
The invention of "Liana's Tool Bag" will help Adventurers who enjoy Gathering to manage their inventories and Gathering tools.
The tool bag holds one of each type of Gathering tool. You can either press F5 or F6, or scroll your mouse wheel to conveniently engage in each type of Gathering activity by equipping the tool bag.
Many of our Adventurers have been wanting this for a while now, and we also have been wanting to develop it, which is why it's such a pleasure to finally present this item to our Adventurers with this week's update.
We recommend you fill up your Energy before proceeding with the quest to obtain Liana's Tool Bag as you'll need to pass a trivia quiz!

● "Liana's Tool Bag," a bag that automatically equips all tools held within to conveniently perform Gathering activities, has been invented.
- You can use the [Tool Bag] menu that will appear on the Inventory UI upon obtaining Liana's Tool Bag to store one of each type of Gathering tool.
* Lumbering Axe, Fluid Collector, Butcher Knife, Pickaxe, Hoe, and Tanning Knife

- The Interaction button for the proper Gathering materials will appear on the Ring Menu if you get close to the Gathering materials while Liana's Tool Bag with the Gathering tools is equipped in a slot.
- Use F5 or F6, or activate your mouse cursor and scroll the mouse wheel from the Ring Menu if you want to adjust settings for Interaction.
* Herbs: Barehanded Gathering ↔ Gathering via a Hoe
* Trees: Lumbering ↔ Collecting fluid
* Animals: Butchering ↔ Extracting ↔ Tanning
- The settings for Interaction for Gathering will be set until you re-adjust them.

● There's a rumor going around about how to obtain Liana's Tool Bag.
- Rumor says Adventurers who get recognized as a "knowledgeable Adventurer" by answering all of Liana's riddles correctly will receive a special bag invented by Valentine's Apprentices Liana and her younger twin brother, Ludowig.
- You can accept "[Tool Bag] Liana's Invention" from the Black Spirit from Lv. 49, then find Liana to accept and complete "[Tool Bag] Liana's Trivia" Part 1 and 2 to obtain Liana's Tool Bag (once per Family).
* [TIP] We suggest you prepare Energy Potions since a lot of energy may be consumed during the trivia quiz.

* You cannot use Liana's Tool Bag features in Gamepad UI mode yet, but we are planning to add the features as soon as we are able to.

● Fixed the issue where her idle animation effects appeared abnormal.

● Applied the following improvements and changes to the Music Album:
- Improved composing by allowing notes to be placed where they overlap with pre-existing notes and in octaves that are not supported by the selected instrument.
* Notes in octaves not playable with the instrument will be marked red while it is selected.

● Added colors to item description backgrounds that match the grade of the item.

● Added the item "Cup of Earth's Sorrows" that can be crafted using materials dropped in Elvia Serendia.
- This item is used to upgrade earrings. 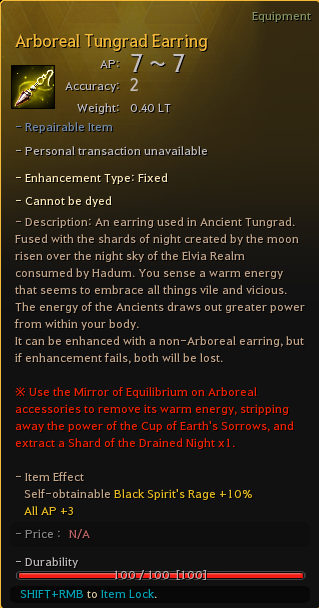 ● Increased the maximum price of PEN (V) Blackstar main weapons, awakening weapons, and sub-weapons to 200,000,000,000 Silver.
- Due to this change, an improvement was made so that the max number of Marni's Unstable Fuel required for copying PEN (V) Blackstar gear will be fixed at 150.

Even though the maximum price of the PEN (V) Blackstar is getting increased to 200 billion Silver, we will keep the item copy cost the same as before. This is so we can uphold our intent in the update where we lowered copy prices by 50%.

● Added new [Residence] quests that rewards you with furniture containing the art of an brilliant up-and-coming Otter paw-doodler.
- Kakuo, a brilliant up-and-coming Otter paw-doodler, has arrived in Splashing Point (located south of Altinova, Mediah).
- Kakuo is a doodler who was found in Corsair's Slippery Scallywags Den. He is extremely determined in turning Splashing Point into Doodleton.
- Go to Kakuo in Splashing Point to accept a daily Family quest from Lv. 56. If you pay for the base cost along with the additional cost, you will obtain an artistically expressive paw-doodle portrait of each class.
* You will get the item "Kakuo's Certificate" by completing the "[Daily] Paw-doodling Kakuo!" quest.
* Go to Kakuo with the item "Kakuo's Certificate" in your possession to complete the "[Daily] Kakuo Paw-doodles for Real!" quest. You can get the class portrait of the class that completed the last quest.
- You need to go to Quests (O) > Quest Type and activate "Life" in order to accepts the quests "[Daily] Kakuo Paw-doodles!" and "[Daily] Kakuo Paw-doodles for Real!"
- The additional payments required by Kakuo depends on his mood that day. (However, forfeiting the quest then accepting it again won't change his mood nor the additional payments required for the day.) 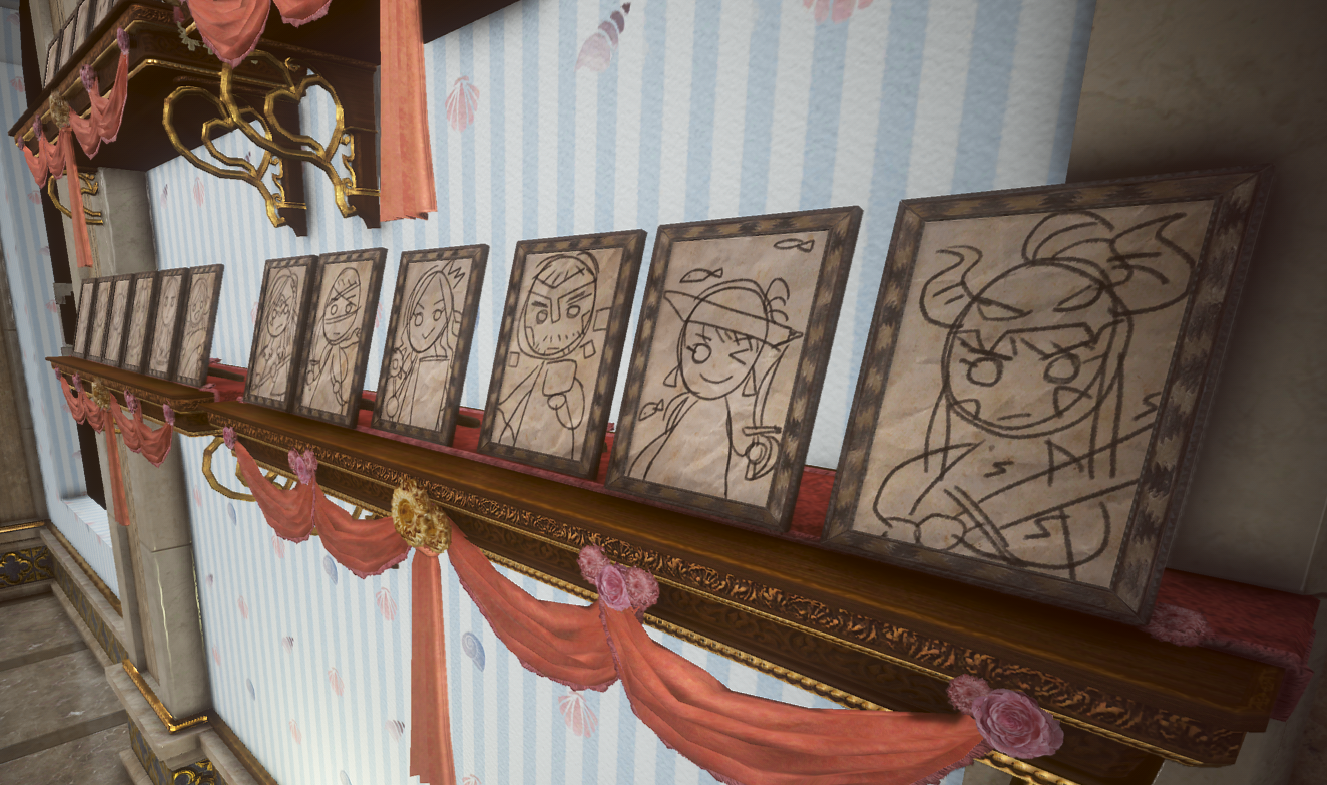 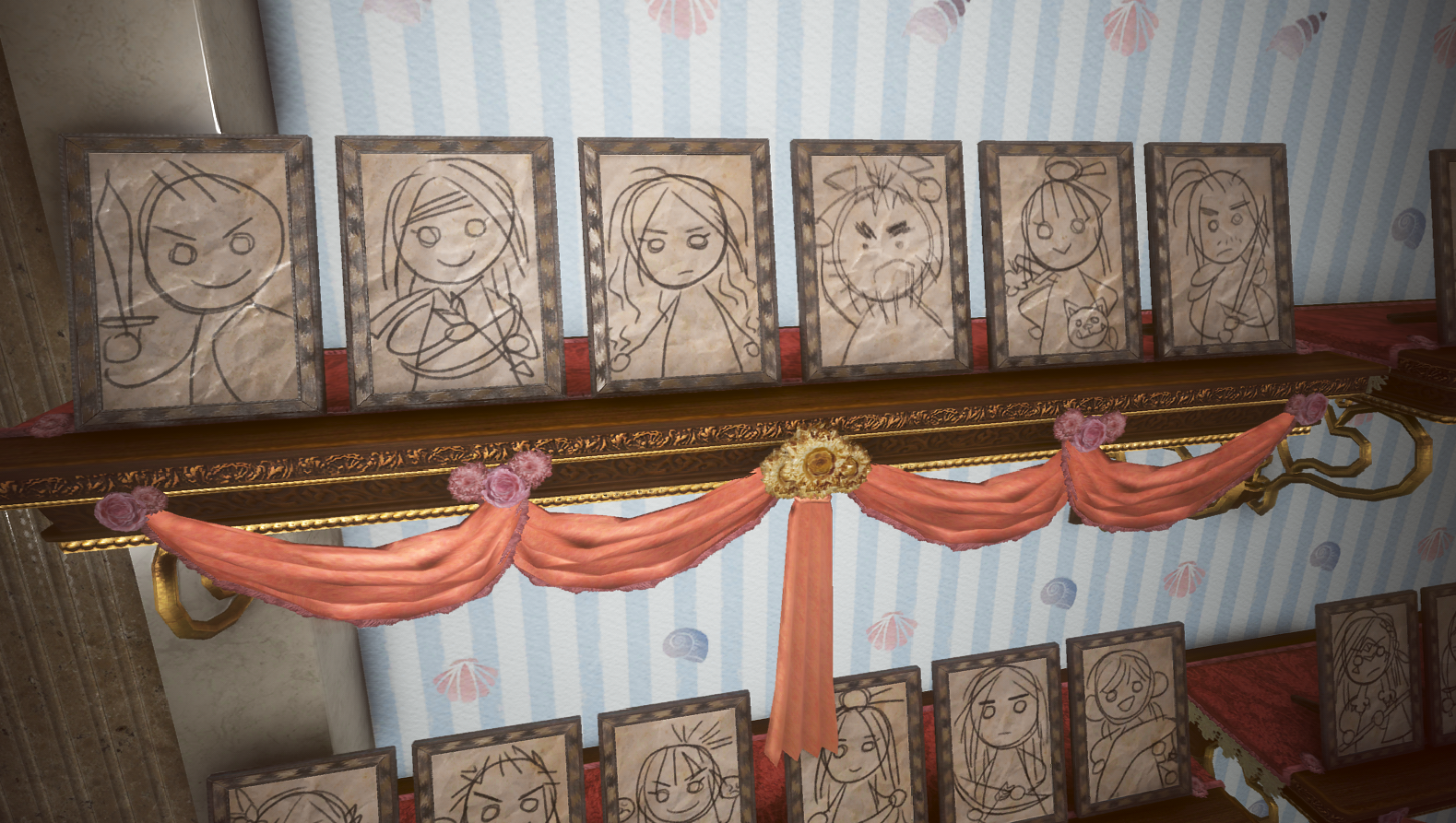 ● Go to Kakuo with a Corsair character that is Lv. 56 or higher and have completed her succession and awakening questline to accept the "[Residence] Paw-doodle" questline.
- You will see how Kakuo's memories with his Slippery Scallywags Cap'n Corsair inspired him to become the brilliant doodler to capture her greatness in his paw-doodle.
* You will need a ship to proceed with this questline. If you do not own a ship, complete the "[The Great Expedition] First Sailboat into Oquilla's Eye!" questline found in Quests (O) > Suggested to obtain a ship.
- Complete the questline with Corsair to get a Corsair portrait from Kakuo for free (once per family).
* You could get Corsair's portrait without completing this questline, however, Kakuo won't recognize you as his true Cap'n and will charge you full price for the portrait.
- Try decorating your residence with the wonderful works of the brilliant doodler Kakuo! 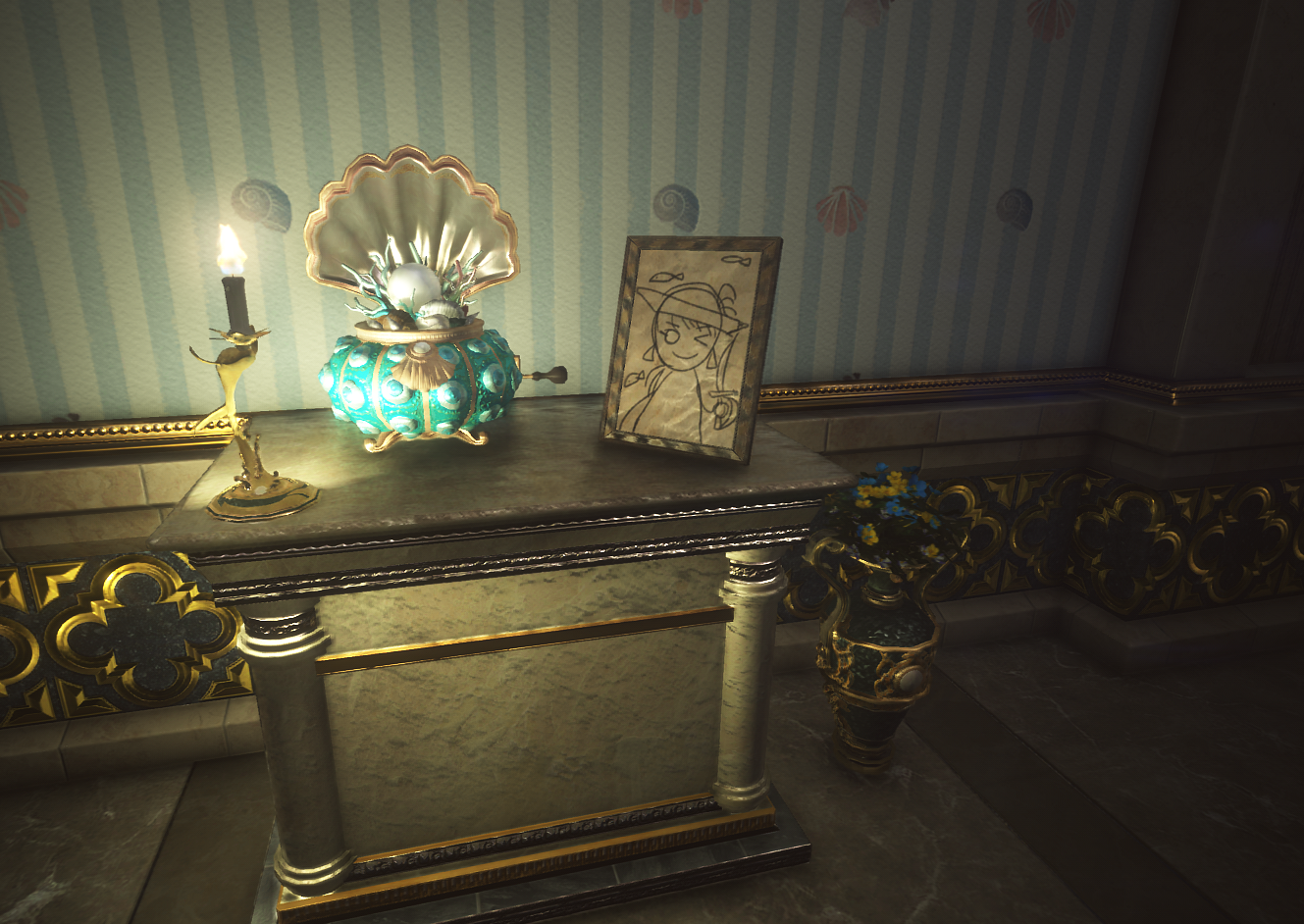 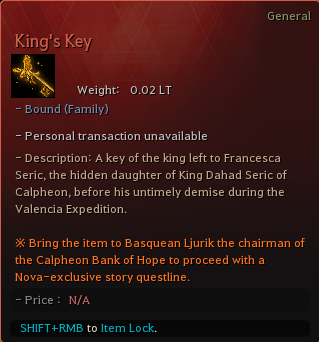 - There's a rumor going around saying that Patrigio of Crow's Nest, a misty island in the distant sea, has aquired a special piece of art.
- Go to Patrigio to start the quest that rewards the special piece of art (available once per family).
* This quest with Patrigio is for other classes to obtain the special piece of art, that can be used to decorate your residence, without Nova's King's Key.
● Added a daily barter quest with Dario, the wharf manager on Iliya Island, that rewards you with the "Part for Explorer's Compass" upon completion.
- Quest Objective: Barter 20 times
- Rewards: Lost Low Quality Trade Goods x1, Part for Explorer's Compass x1
* You can accept this quest by activating all types of quests.
● Reduced the difficulty of the quest "[Everfrost] The Trial of the Fourth Witch."

- [Contribution] [Lv. 56] Duvencrune
* [Repeat] Strategy to Get the Blueprint
● Fixed the issue where you couldn't proceed with "The Prophet's Key" while mounted.

● Improved the Villa Scroll UI so that you can more easily and conveniently check out villa scroll buffs from your campsite. 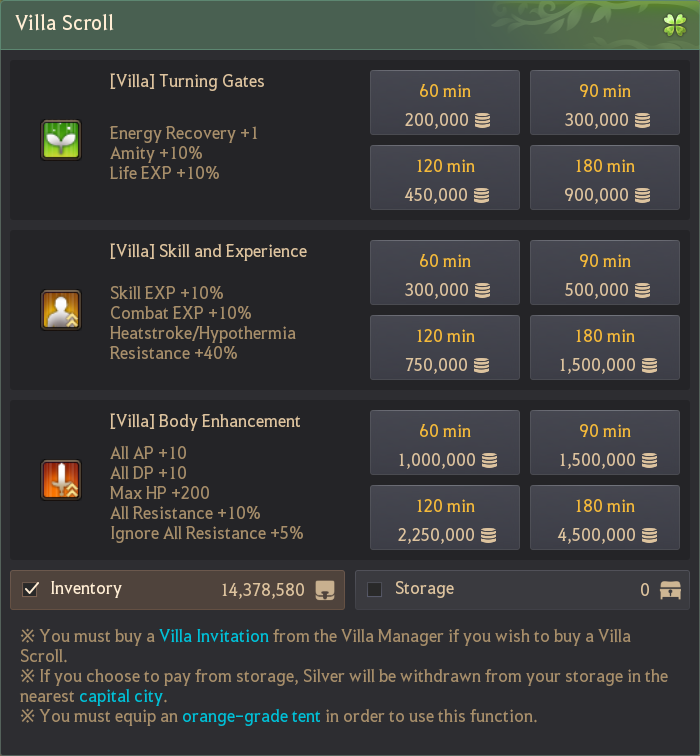 ● Added the part on how you also cannot enter Marni's Realm on a Node War server to the text on the Marni's Realm UI.
● Added brackets to each of the bosses' names displayed on the Boss Notification UI.