● Fixed the issue where some Skill Enhancements were not being applied as intended.

● Kunai Block - Fixed the issue where the Kunai would disappear when using the skill.

● Core: Spirit Hunt - Fixed the issue where using this skill while in Main Weapon stance would cause the skill to trigger in place.

● Fixed the issue where the Awakening standby animation wasn't being displayed.

● Royal Fencing: Fleche - Fixed the issue where the Super Armor effect would not apply on the last hit.

● Changed the original items copied via Item Copy so that they can no longer be sold to vendors.
● Added information regarding the success rates of changing a mount's skills when using the Mount Skill Change Coupon. 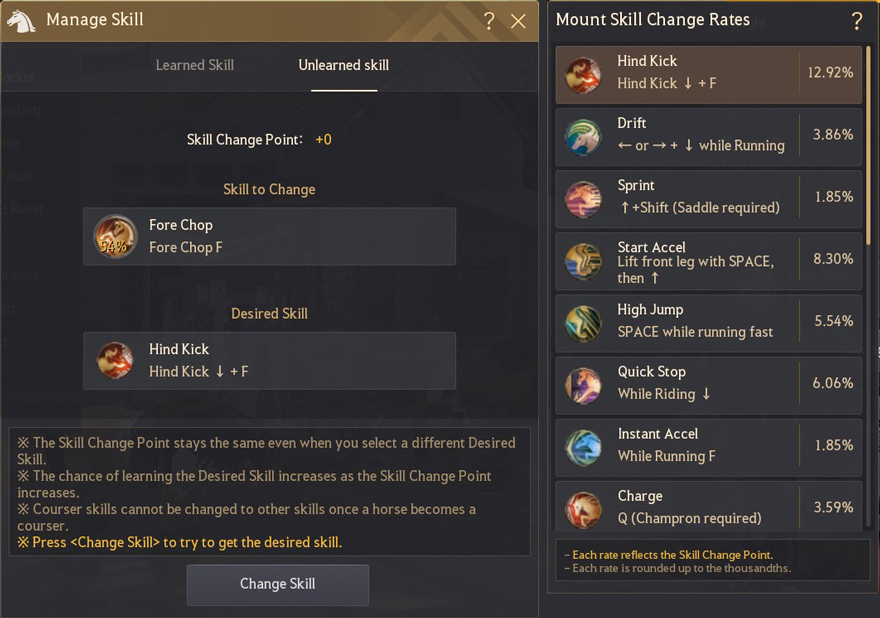 ● Added success rate details to the Premium Horse Appearance Change Coupon.
● Changed the 'Cannot use if you have either an active Trainer's Flute or another Celestial Horse Calling Horn in your inventory' text to be more visible in the item description of the Celestial Horse Calling Horn (Permanent).
● [Archer] Karki Suit - Added text in the item description to state that equipping the Crossbow and Ra'ghon will make portions of the Karki Suit invisible.

● Added the Alchemy quest [Bonus] A Simple Test from Alustin I.
- You will randomly receive one of three completion requirements upon accepting this quest. Visit Alustin of Velia after completing the quest to receive your reward.

- 80,000 Alchemy EXP will raise your Alchemy Level to Skilled 2 if you are Skilled 1, or by 70% if you are Professional 1.
- These quests will appear randomly depending on your Alchemy level when you craft certain Alchemy products.
- You cannot accept more than one [Bonus] Alchemy quest at a time.
- The bonus quests will appear after crafting blood, perfume, elixir, or essence (excluding Essence of Tunta) products through alchemy.

We've added new [Bonus] Alchemy quests that will randomly appear while you are performing alchemy. These Alchemy quests will offer opportunities to obtain Trace items as rewards, which are used in many Alchemy recipes but take a long time to gather. You will be able to choose what kind of Trace item you'll receive as a reward, so we hope that this will help our alchemists in procuring the alchemy materials they need. Also, you can choose to obtain additional Alchemy EXP instead of Trace items. We hope this will aid you in your path to becoming a famous alchemist!

To keep with the 'practice' aspect of a practice cannon, we've made it so that the area of impact is marked on the World Map. However, this feature does not apply to normal cannons.
● Increased the item count for Cargo of the Falasi Family at Port Epheria.

● Removed 'PRI (I) Tuvala Awakening Weapon Box' from the Awakening quest reward list for all the classes.
● Fixed and changed the following aspects of Sage's Awakening questline.
- Fixed the issue where using a skill in the Ancient Stone Chamber would allow you to pass through the closed stone door. If you exit the stone chambers during the questline, we've added an NPC in front of the stone door to return you to the chambers.
- Added and fixed the text for '[Sage Awakening] Wholly Resurrected', '[Sage Awakening] Kibelius of Destiny - Combo/Practice' quests.
- Added a screen effect if you interact with Talibre's Door during the '[Sage Awakening] A Strange Ancient Device' quest.

● Fixed the issue where using auto-navigate to move ships between Derko and Hakoven islands would cause said ships to get stuck in the terrain.
● Completed terraforming Lerao Island to be easier for Carracks to sail through. 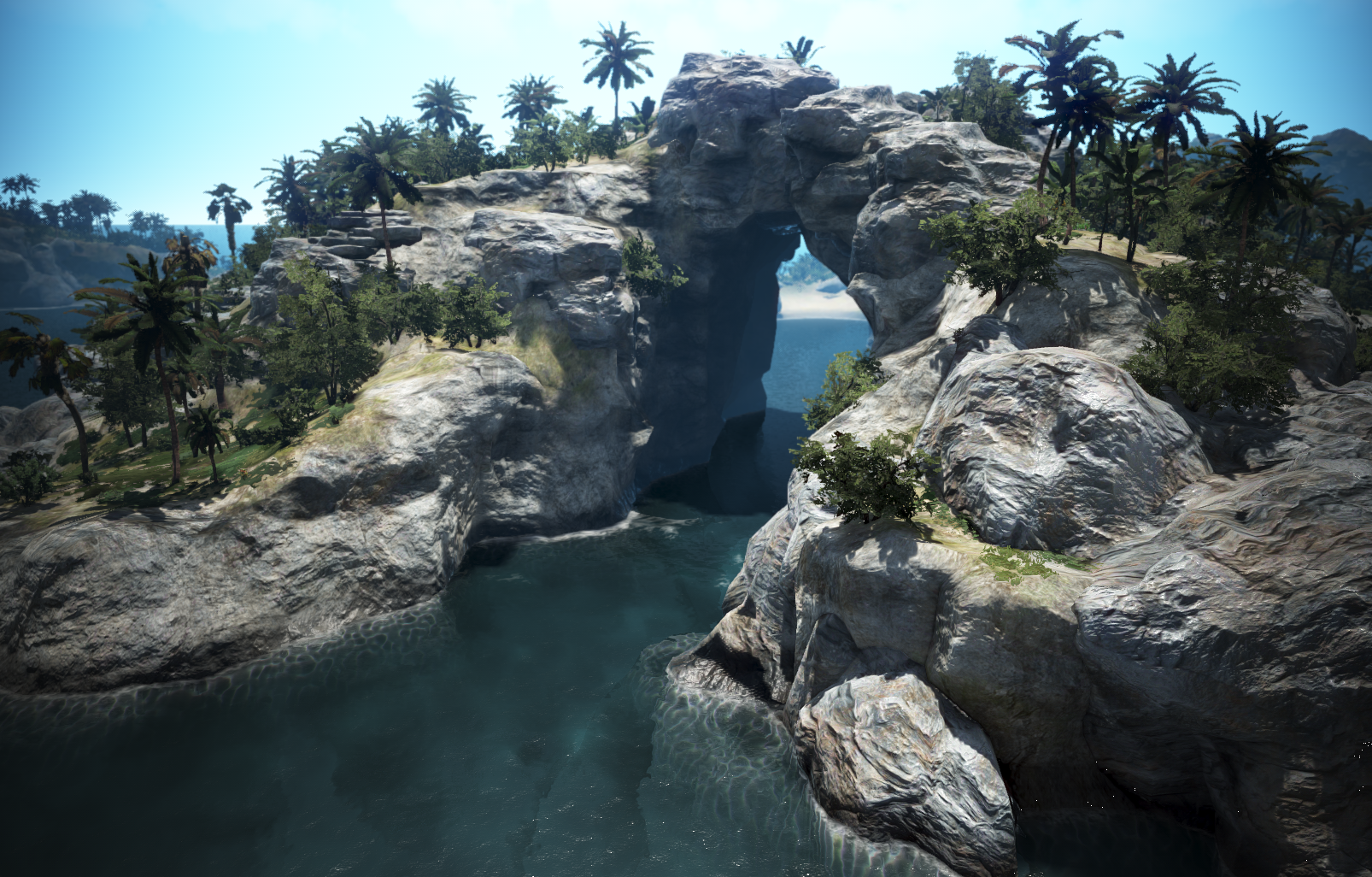 ● Changed the names of the GM NPCs to follow a gemstone theme.
- These GM NPCs may appear in future events.

● Changed the Server Selection window to no longer separate Elvia servers. They will be displayed with all the other servers in alphabetical order.
● Added a 'My Stable' feature to view where all one's land mounts are stabled at from the World Map (M). 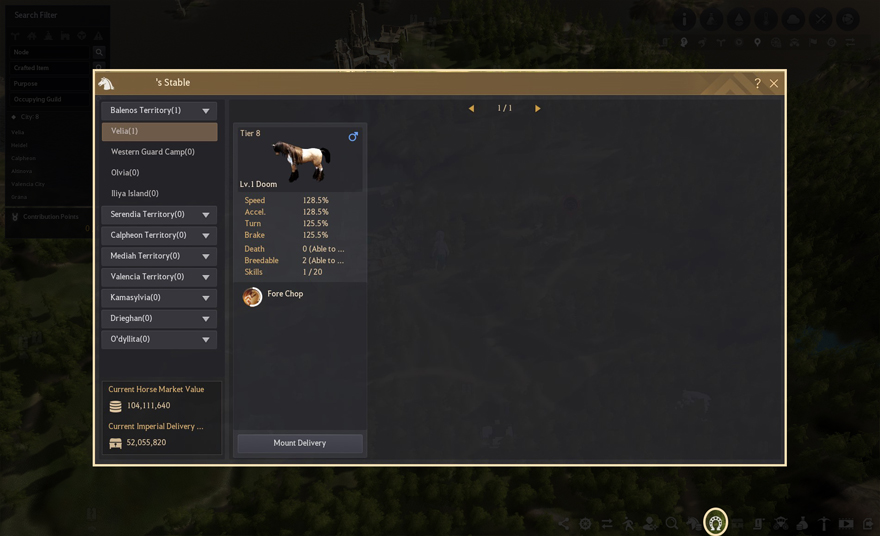 ● Added the description that you cannot change courser skills to other skills for a mount undergoing Courser Training while changing a mount's skill at a stable.
● Added a key to exit the race track after finishing the Old Moon Grand Prix when using the Gamepad UI.
● Added text to display that the 1st family name change is free for New Adventurers who haven't yet changed their family name and are attempting to purchase a name change coupon from the Pearl Shop.
● Changed the Skills window button to read 'Awakening Complete' upon completing the Awakening questline after Succession.
- Changed the Skills window to now have the Awakening tab selected after confirming the above button.
● Added text to the Guild Skill window and Node/Conquest War-only skill descriptions stating that the Spirit of Battle will cause Guild Skill effects to apply to all members of an Alliance.
● Fixed the text in the 'About Fairy Skill Change' window.

● Fixed the issue where pre-orders for an item listed on the Central Marketplace at the Maximum Price wouldn't proceed randomly.

We carried out an update during the maintenance on April 21, 2021 (Wed) to fix an issue where the Central Marketplace prices were changing irregularly. However, we discovered that when an item was listed on the market at max price, pre-orders for the item wouldn't be carried out randomly. Thus, we've fixed this issue with today's update.
● Optimized the frequency of memory usage to provide a better gameplay experience for Adventurers.
● [EU] Improved the speed of guild chat in Black Desert+.

● Fixed the issue where the Special Action button would not show for the [Striker] Syahzar Outfit while the Awakening Weapon button was toggled on.
● Changed the Set Creator button so that a glowing effect will appear around the button when hovering the mouse over it or clicking it.
● Changed the camera effects to highlight the Kibelius when it is selected in the Pearl Shop.

● Changed Black Spirit's Adventure so that hovering the mouse over the dice will show the possible squares the Black Spirit gamepiece can move to (1-12 steps).
● Fixed the issue where the Beauty Album's tabs would sometimes not work.

● Changed the class introductions on the official website so that the background will accommodate the length of the text.
● Fixed the awkward locations of the tooltips for the Beauty Album and Photo Gallery when viewing the website on mobile.
● Fixed the issue where the select box for Update History would be cut off when viewing the website on mobile.

● Improved the launcher to now allow you to press Enter after inputting the OTP code.
● Fixed the issue where a scrollbar would appear next to the image in a Photo Gallery post with multiple images.
● Added the feature to remotely log out of the Black Desert+ app from Account Information > Account Security Center.
● Changed the background image for the official website.
● Fixed the issue where the most popular Beauty Album entries weren't being displayed correctly.
● Removed the button to share posts from the Black Desert+ app.

● Improved the overall design of the official website.
● Changed the Web Storage to now display the 'Method of Retrieval' for used coupons as 'Coupon.'
● Changed the message displayed when pressing the button to purchase a package with a Steam account.
● Removed the download button from the wallpaper download page when viewed on a mobile device.
● Changed the wallpaper download page to now allow downloads by using either RMB or holding down on the screen when viewed on a mobile device.
● Improved certain pages that were displayed awkwardly in the Black Desert+ app.
● Fixed the issue where the select box color scheme incorrectly was displayed in grey when viewed on an Android device.
● Changed accounts without a Family to see details regarding the transfer after logging into the launcher.

We hope you enjoy your time in Black Desert, thank you.