● Released the awakening of Sage, the one who returned. 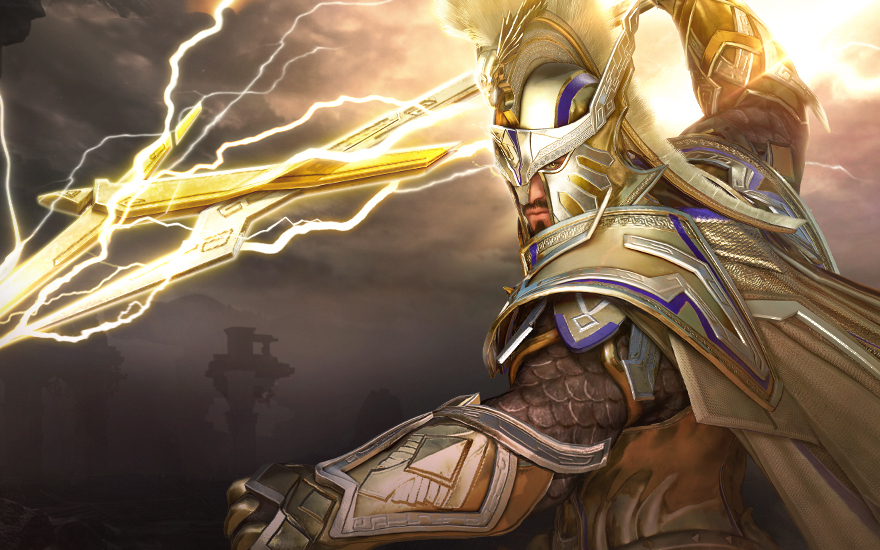 - Adventurers can now awaken Sage. Their Sage will need to be Lv.56 or higher and complete the questline '[Sage Awakening] Hurried Footsteps.' This questline is available from Black Spirit - Suggested.

● Fixed the issue where switching to a non-combat stance while moving forward in awakening stance would allow her to activate main weapon skills quicker than normal. 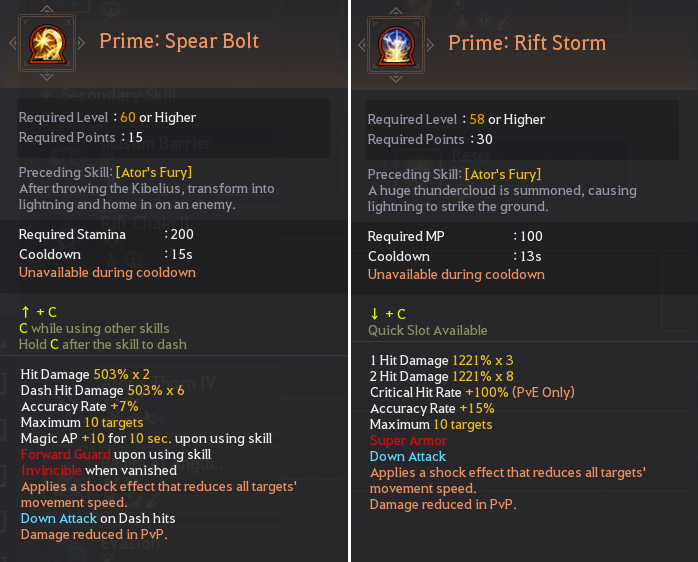 ● Ator's Palm, Ator's Illusion, Energized Thorn, Piercing Thorn - Improved combat dynamics.
● Energized Thorn, Piercing Thorn - Fixed the issue where using the skills would consume stamina.
● Rift Chain - Changed the skill so that you can deactivate Rift Chain by pressing any skill key, with the exception of Shift and movement keys.
ex) If you press F to use Ator's Fist while using Rift Chain, Rift Chain will deactivate and Ator's Fist will activate.
● Fixed the issue where an abnormal system message would appear when attacking forwards with bare hands.

- Celestial Horse Calling Horn is a character-bound item.
- Celestial Horse Calling Horn cannot be used if the mount you are summoning is carrying Trade items.
- Added a daily quest that resets at midnight and a quest available once per family that rewards you with Celestial Horse's Tears.
- Erfianso, the node manager of Atanis Pond, values the bond between Adventurers and horses. In the [Daily] Atanis Confection quests, she will reward more Atanis Confections to Adventurers with more training experience.
- You can choose one of the two [Daily] Atanis Confection quests according to your training level, and you may only complete one.
● Deleted the set effect conditions for Blackstar and Obsidian Blackstar Defense gear from the item descriptions.

● Reports of rare animal sightings from all over are reaching some seasoned hunters. Many hunters living in quiet seclusion in Behr have gathered to put together a Rare Hunting Guide. You might be able to get special information about these rare animals by becoming friendly with the hunters.
- Added [Knowledge - Ecology - Rare Hunting Guide] Category
- Added the following rare monsters for hunting.

- You may be able to obtain knowledge by hunting rare animals, and obtain the following titles.

● Lerao Island's Ravio, who became a barterer to hear many different tales from Adventurers, is sad that there are fewer visitors to the island nowadays. Ravio has asked Igor Bartali, chief of Velia, for construction laborers after hearing that many Adventurers are finding it difficult to enter the island.

- Laborers are working on construction on parts of Lerao Island so that large ships will be able to approach the island more easily. 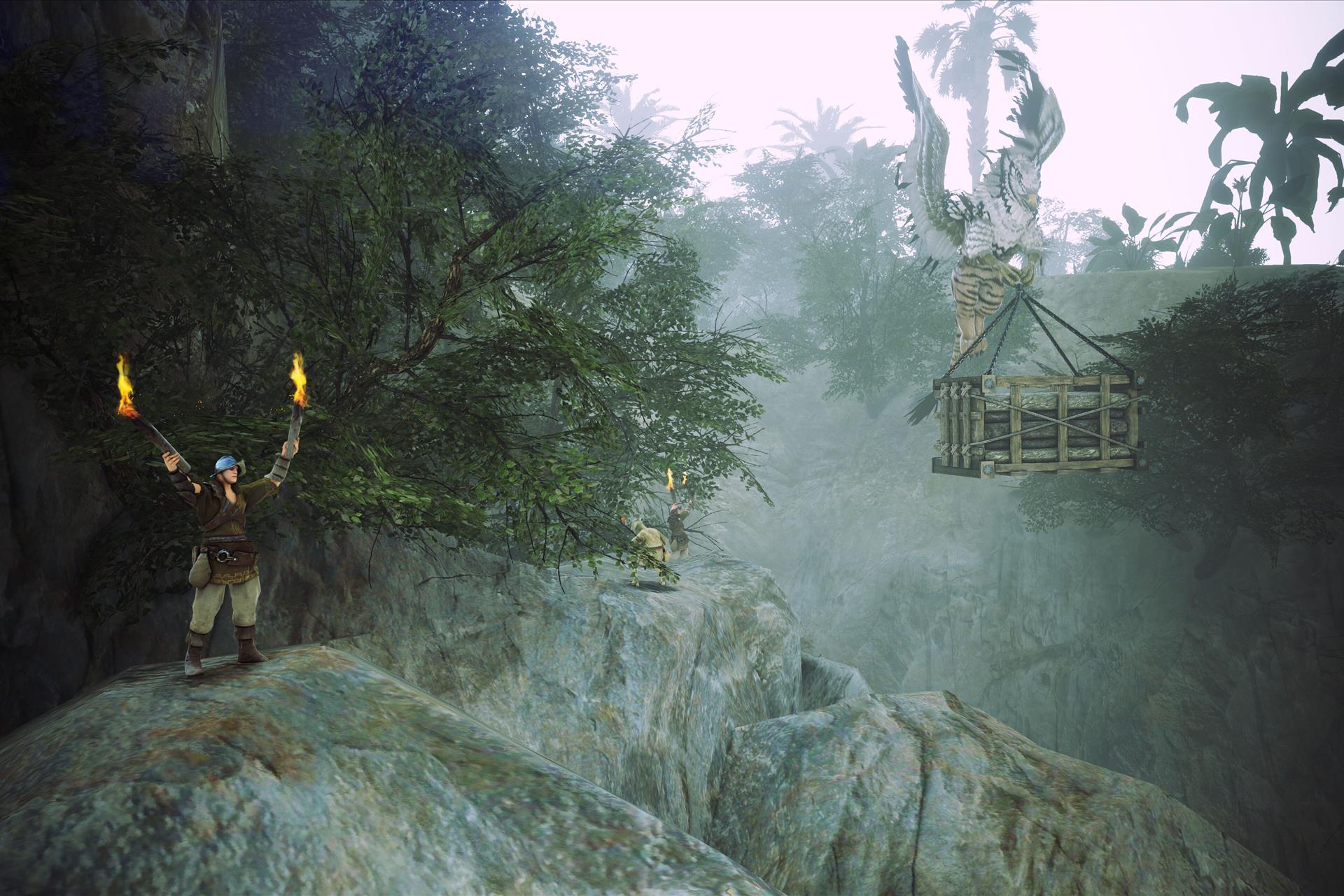 We are working continuously to resolve issues that may interfere with the enjoyment of Great Ocean bartering by our Adventurers—issues such as getting stuck on certain parts of the topography or having difficulty interacting with Barterers.

● Added the word 'Elvia' to titles of daily hunting quests only available on the Elvia server.

● Added a more detailed description to the Central Market's Sell UI about the quantity restriction according to Family Fame for Pearl items you can sell.

● Added a loading image that shows the backs of Hashashin, Berserker, Warrior, Ranger, and Witch.

Added 4 other companions in accordance to Adventurer feedback that the previous image of a solo Warrior made him look lonely.
● Changed the 'Canceled' message displayed when you cancel a worker's work to 'Canceling.'
● Changed the purchase icon that appears when you run out of inventory slots or reach your weight limit to display the Buy UI.
● Changed the following check box features so that they will be saved after reloading Settings Archives and changing characters.
- Continuously use BreezySail
- Send to tray when quitting
● Added a 'Don't show again today' option to the notice on the Expiring Item window.
● Changed Gamepad UI so that you can save settings with hotkeys instead of pressing on the Apply/Confirm button in Settings.
● Added the Black Spirit's Rage menu to the New Menu in Gamepad UI.
● Removed the Fishing Event guide widget displayed with the Fishing UI, as the event period has ended.

● Fixed the issue where prices that shouldn't change would change when items of a certain category on pre-order for maximum or minimum prices would be sold.

The 'certain categories' that we mentioned refer to weapons like Kzarka, Dandelion, and Blackstar. To prevent Central Market abusing, we put weapons into the same category regardless of grade, so that prices will shift no matter what item is sold. Prices that should have remained the same shifted while in this process, and we have fixed this issue.

● Changed the line breaks in the How to Play window of Black Spirit's Adventure so that they look more natural.
● Added a Cookie Agreement popup to the Web Central Market page.
● Changed the PC view image for the Class Introduction section on the main page of the official website.
● Fixed the issue where the text at the top of the News page would be broken.
● Fixed the issue where logging in after changing language settings in the NA/EU launcher would not save your language settings.
● Fixed the issue where the mobile view tooltip in Beauty Album and Photo Gallery was in an awkward location.
● Added the option to change your game language in the launcher with a Steam account.

● Added game rating to the bottom left of the video loop.

● Added a Sage Awakening section to the main page of the website.

● Fixed the issue where the Terms of Service numbers would be displayed abnormally on the Steam launcher.
● Renewed wallpaper images.
● Added mobile versions of wallpaper images.
● Changed the Adventurer page so that searching will be easier on Internet Explorer.
● Changed the Guest Pass Coupons to send Adventurers to the Download page if they never logged into the game before.
● Added the message 'You have already purchased a package with this account' to appear when an Adventurer with a pass attempts to use a coupon with a game pass.
● Fixed the issue where text would bleed out of the UI if it was too long in the Class Introduction page.
● Added payment confirmation emails to be sent when payment is complete.

We hope you enjoy your time in Black Desert, thank you