As various classes and regions have been released, the world of Black Desert has grown much broader. To make it easier for Adventurers to check the locations of items wherever they may be in the world, we have added the “Find My Item” function.

This function allows Adventurers to simultaneously search across their Family’s Storage, Central Market warehouse, inventories, equipped gear, etc. all at once.

This function can be found from the ESC menu or with the search button in your Storage. We hope this adds convenience to your adventures.

● You can check the amount of Silver that your Family has when searching for "Silver" via Find My Item. 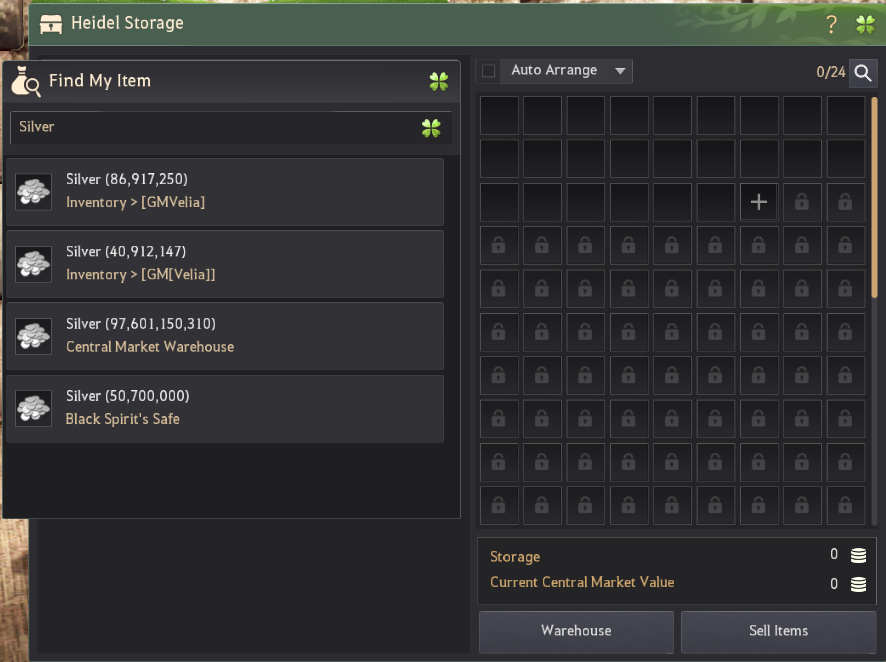 ● Added a button so that you can check the gear and Inventory of one character from another character. 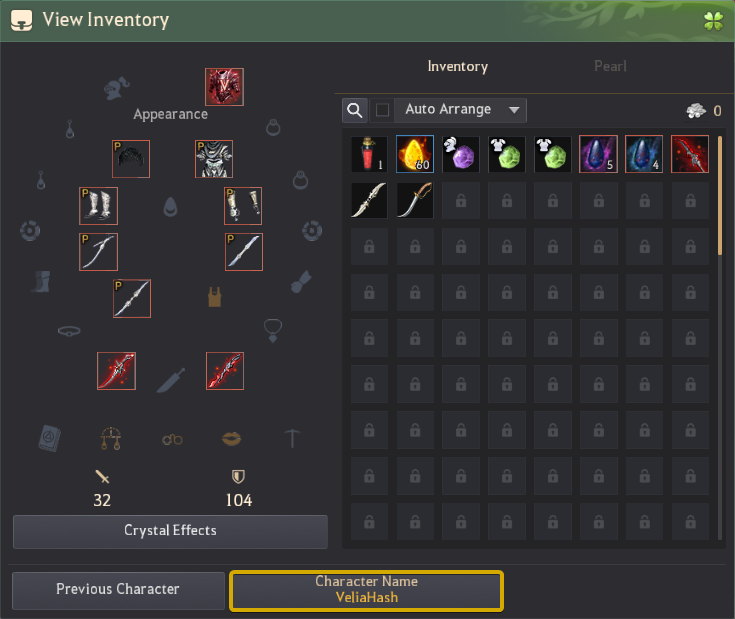 ● Improved the facial expressions of the following classes to appear more natural when idle for both in and out of combat, or while guarding.
- Warrior, Valkyrie, Ranger, Witch, Kunoichi, Mystic, Archer, Nova

● Evasion (II to III)
- Improved to now activate "Invincible at the start of the skill" when used laterally.

Awakening
● Black Spirit: Echo Pierce
- Fixed the issue where the attack effect wasn't being displayed during the skill.

● Marked Bloom
- Fixed the issue where "normal damage" instead of "arrow damage" was being applied for PvE when used during cooldown.

Today's update brings about several changes to Hashshin for PvP. The main reason for this was to strengthen the unique traits of his Succession.

First off, we've bolstered the "assassin"-like PvP playstyle which utilizes sand tornados. We added a Succession-only version of Hourglass of Defiance, and Arid Assault will now automatically save your character's current location whenever it's used, thus allowing you to return to the saved location by pressing the F key. (You will still be able to manually save the return location as before as well.) Also, whenever you return to a saved location, you will activate Rupture's explosive damage, and using Arid Assault will create sand tornados in the location the skill was used, creating more opportunities to confuse your foes.

We've also administered slight changes to his defensive effects as well.
First, Prime: Dune Slash attacks no longer apply the Forward Guard effect, which was moved to now apply before the attack motion of the more popular Prime: Aal's Dominion. Quicksand's last attack will now only apply the Knockdown effect for PvE, while Piercing Tornado will now gain the Super Armor effect during use, thus allowing for safer openings with the skill. Chosen Blade will no longer apply Stiffness but also gains Super Armor to help create safer combo opportunities.

Lastly, we've applied changes to dealing and taking damage.
Hashashin was, on average, the class with the lowest damage ratio compared to other classes. Therefore, the better geared you were, the sturdier you became thanks to Evasion Rate increase buffs from skills (Sand Warp) and passives. This made us very wary of increasing Hashashin's AP or Accuracy altogether. However, many of our Hashashin Adventurers gave us vocal feedback to improve the class's offensive capabilities, so we decided to make adjustments accordingly. In conclusion, what we came up with was to amplify the Hashashin's utility via the sand tornado mechanic, improve some of his defensive effects and PvP damage, and in return, the Hashashin's incoming damage ratio taken when attacked by other classes was increased by approximately 3.25% on average. 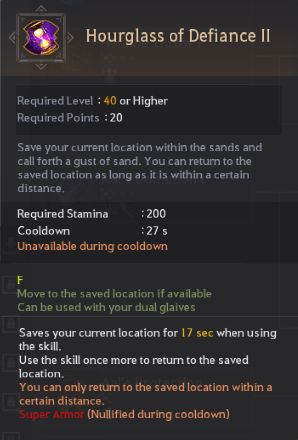 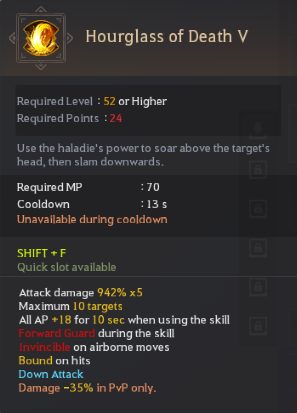 ● Prime: Chosen Blade
- Removed the Stiffness effect before attacks. Added the Super Armor effect to last up to the last attack.

We’ve added a chance of obtaining greater amounts of loot when Gathering.
You can now gain additional “Fairy’s Breath” from Gathering loot which can be exchanged for Contribution or Gathering EXP, like Cooking or Alchemy Byproducts, or for Hard Black Crystal Shards or Sharp Black Crystal Shards.
Additionally, you may stumble upon buried chests while Gathering which you can open with a Gold Key to obtain additional loot.
● Added items to obtain Fairy Breath through Lumbering, Skinning, Extracting, Hoe, Mining, Water Scooping, Butchering.
- You can exchange with Fairy's Breath x10 to one of the following items from Dalishain in Town:
- Applies Gathering Mastery to Fairy's Breath drop rate.
※ Fairy's Breath does not apply to Pet's Gathering Item Quantity Increase. Check Gathering Item that applies Quantity Increase in [Pets] from Adventurer's Guide. 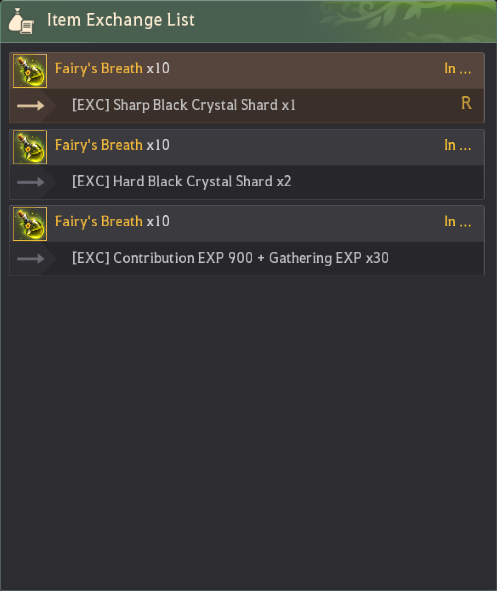 ● There is a low chance to find Buried Trace when Lumbering, Tanning, Extracting, Hoeing, Mining or Butchering.
- A "Mystery Box" will appear when mining near the found trace.
- The box can only be opened with a gold key. The following items can be obtained when opening the box.
- Gathering Mastery applies to the chance of finding buried trace.
※ The Mystery Box disappears when it's opened or some time has elapsed.

Oh, right! The Gold Bars!
Gold Bar buffs have already been improved once in the previous update. Even now, the act of handing over the Gold Bar to receive the buff was symbolic, like a ritual to receive a blessing.
In this update, we have changed so that adventurers can receive blessings directly with Silver for greater convenience.

But... what would you like this buff to be called?
The Gold Buff of the Ol' Days? The Shiny Silver Buff? We look forward to your awesome ideas.

● Changed the item that is needed when you receive a buff of 120 minutes that can be obtained by exchanging a gold bar to an NPC.
- Changed the needed item as follows to get AP, DP, and EXP buff effects. 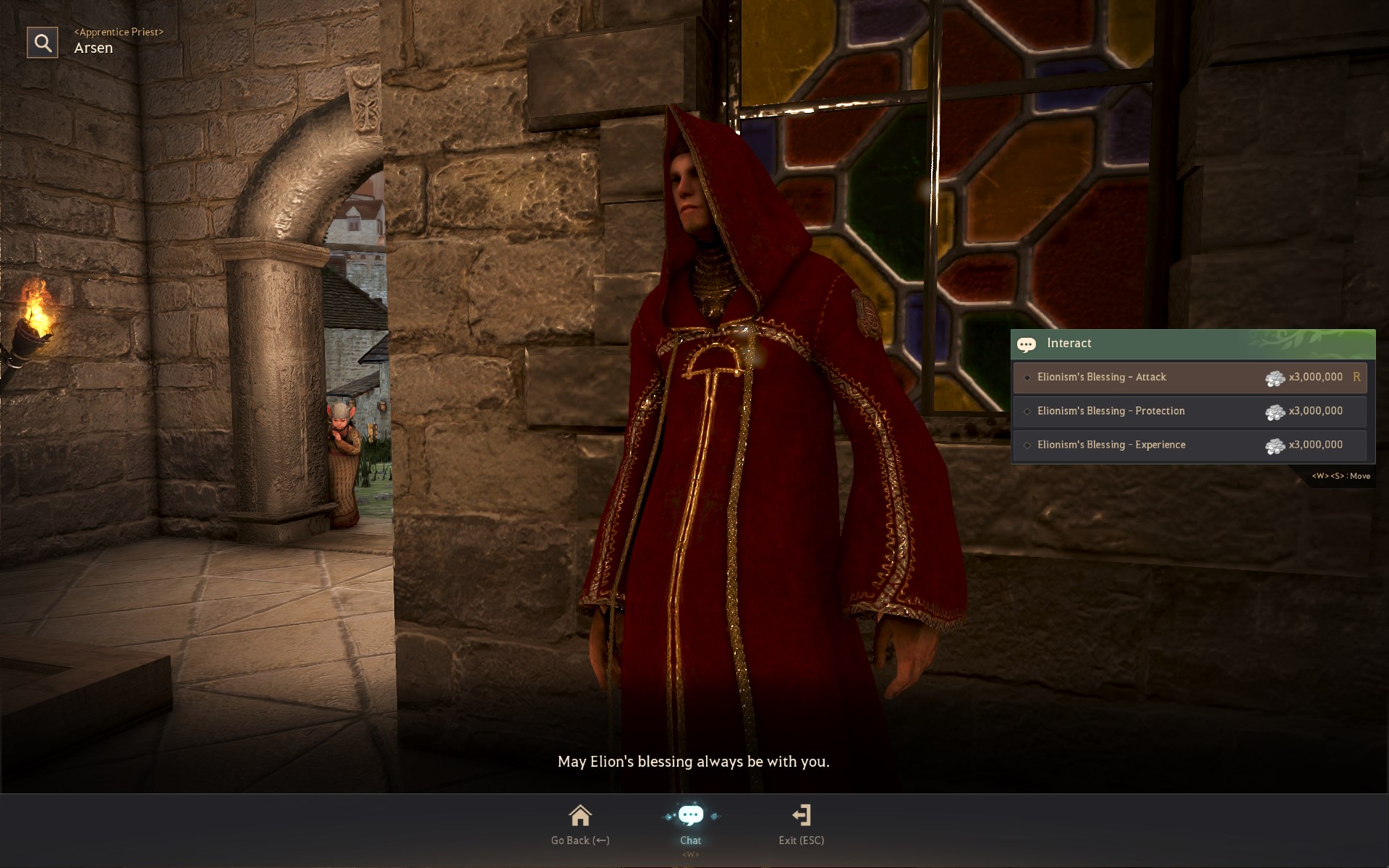 ● Seed Vendors have decided to sell additional Seed Bundles in 5, 10 and 20.
- Choose the right seed bundle to obtain the amount of seeds that you want.
- Seed Bundle with 5, 10, 20 are the following:
※ Seed Bundles can be stacked in the Inventory.

- Vendors that sell in bundles are the following:

● Fixed the issue where Bloodstorm Nouver's sandstorm effect did not disappear in certain situations.

● Added several new side quests to the world of Black Desert.
- A man wants to profess his feelings to someone in Velia.
- Norma Leight at Northern Wheat Plantation is suspicious of a man due to the recent disappearance of grain from the plantation.
- Zelfinith, the armor vendor in Florin, is having difficulty sleeping at night due to a noise that echoes from the top of the mountain.
- Shakatu at Altinova Arena is looking for a Shai who will help solve the problem of a minstrel he hired.
- Jean-Louis and the human workers at Awina's Tail Charcoal Workshop in the Mountain of Eternal Winter have changed drastically.
- You can meet a familiar, friendly face at Maslan's Yulas Citron Orchard in the Mountain of Eternal Winter.
※ You must complete all of the main quests of [Everfrost] questline in order to learn more about the changes occuring in the Mountain of Eternal Winter.

● Added a quest [Pet] Becoming the Alpha where you learn how to train Tier 5 pets.
- You can accept this quest from Obi Bellen after you complete the quest [Pet] Who'll Take The Lead?.
- This quest can be found under the Suggested list.
※ If you do not see the quest, you can set the quest type to [Life] and then proceed with the quest.

● Changed the following side quests.
- Improved the tales of strange happenings in Faust Forest told around Keplan.
- Improved the story told by Dustin, the blacksmith of Weita Island, of weird sounds coming from the island.

● Fixed the issue of not being able to accept the quests "Eileen's Request" or "A Very Minute Flaw" to expand your Inventory when doing the Simplified "[Special Growth] Birth of a Prestigious Family" quest during Balenos reboot main questline.

● Changed the Radiant Undersea Vortex Knowledge category as follows:
- Exploration I  → The Great Expedition V
- Reduced required knowledge for max energy from the Exploration I Knowledge category by one.
● Improved the dialog when accepting Nurio's Dream quest.
● Improved the description of the NPC Serazad's Conversation button from which the Miniature Elephant quest can be accepted.
● Fixed the issue of "[Horse Emblem] Seal of the Secret Guards" showing in the quest window even after completing the quest.
● Changed Helm Tribe Chief name to Helm Tribe Chief Steel Nux and fixed the issue of the image not showing.
● Improved Krahtenn's image so it matches Krahtenn's current appearance.
● Changed the rewards for the [Godr-Ayed Weapon] In the Fallen God's Name quests where you could convert your TET (IV) Blackstar wepaon into a Godr-Ayed weapon.
- You will now receive an equippable Godr-Ayed weapon instead of a "Sealed" Godr-Ayed weapon.

To celebrate Black Desert being serviced in all regions, your longtime companion, the Black Spirit, has prepared a special gift for the occasion with the "Blood-eyed Visor" and "Blood-eyed Earrings!"

We'd like to thank all of our Adventurers for enjoying Black Desert.

● Added Event quests available through the Black Spirit (/) to obtain the "Blood-eyed Visor" and "Blood-eyed Earrings."
- You can find the [Event] Touchy-Feely Heart to Heart and [Event] Now You're Making Me Blush quests in the Black Spirit (/) - Quest - Event tab.
- These quests will be available from July 20, 2022 (Wed) after maintenance until Dec 28, 2022 (Wed) before maintenance. (Once per Family)
* You can move the Blood-eyed Visor and Blood-eyed Earrings to another character in your Family via storage.
* You will need to complete these quests in order.
* You can complete this quest once per Family.
A Closer Look at the Blood-eyed Visor and Earrings 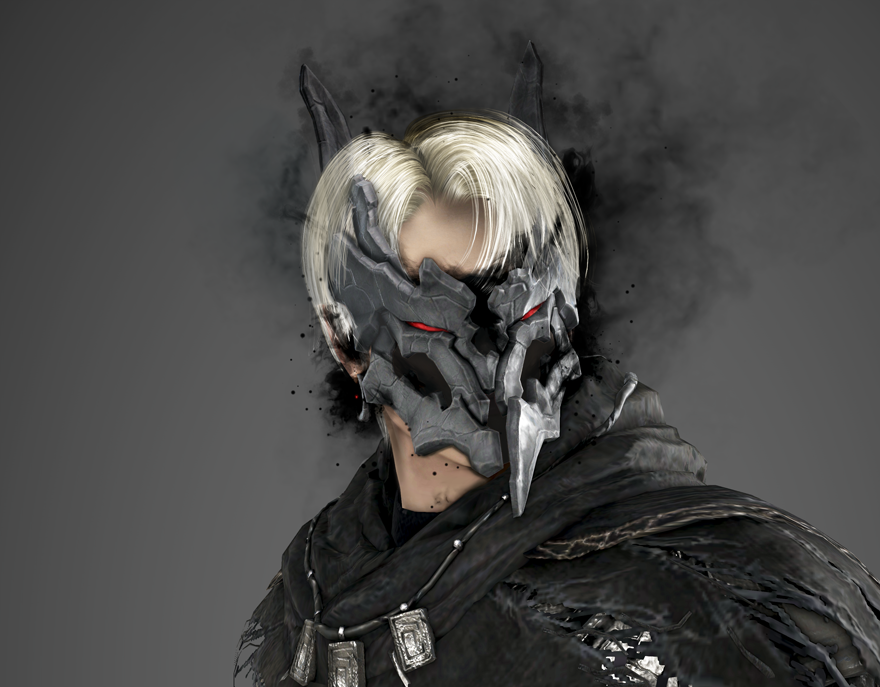 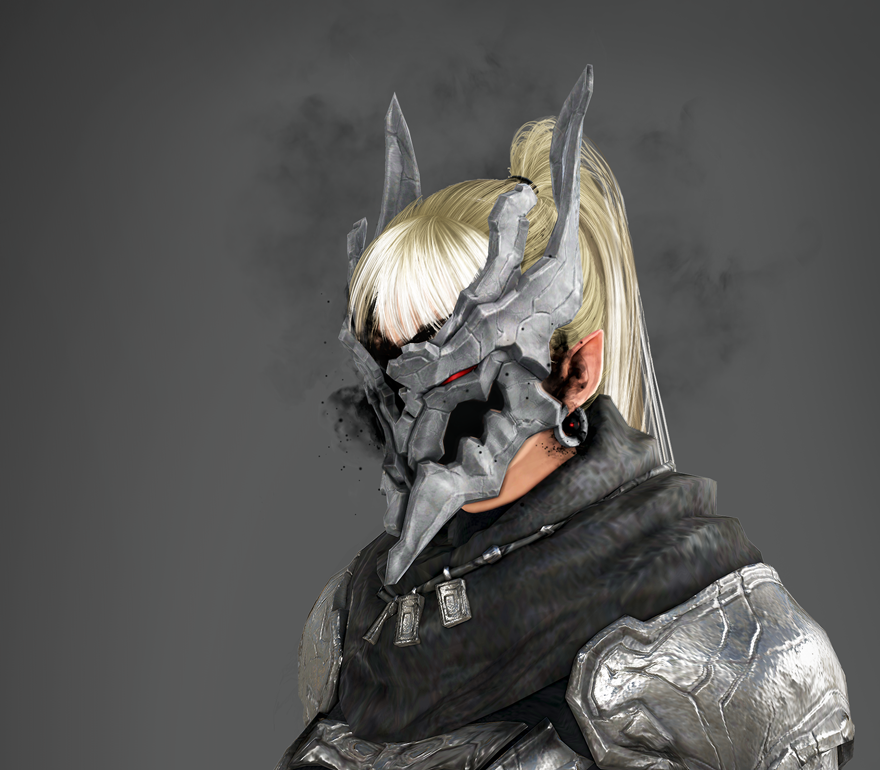 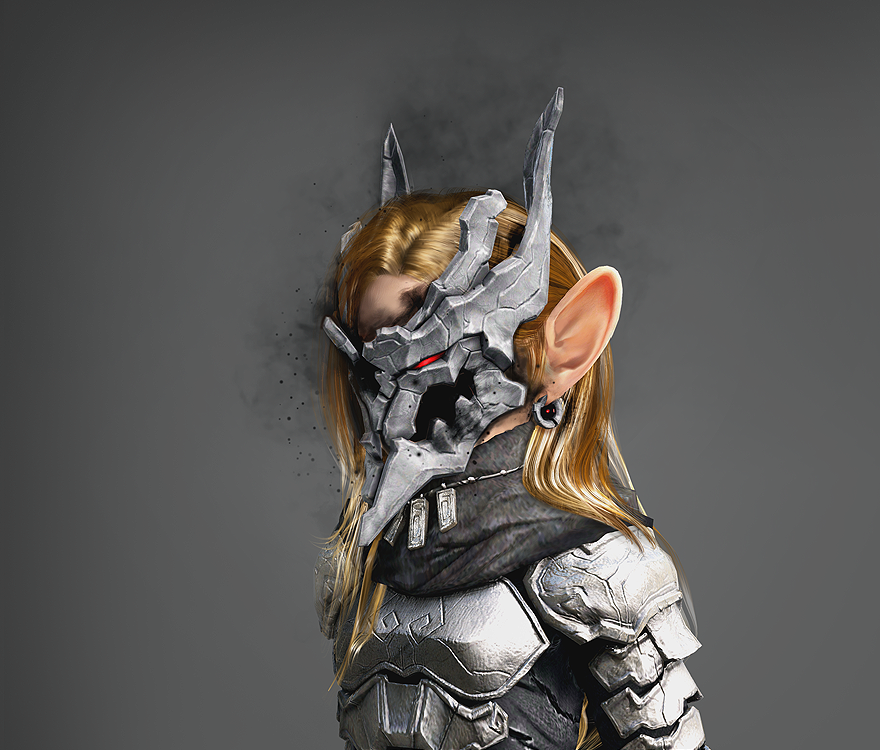 ● Fixed the issue where the gate icon would be marked in another location if you opened the World Map in a region other than the region currently undergoing a Conquest War.

We're working to improve the terrain of certain areas, along with some major Monster Zones. So we’ve improved some elements that would impede your movement in the Orc Camp (especially Marni’s Realm), and fixed the Blood Wolf Settlement and the Troll Habitat.
Please bear in mind, this isn’t a singular update, and we will continue to improve regions like Kamasylvia to allow for less hindering movement.
● Improved some terrain elements that hindered travel in different areas:
- Orc Camp

▲ You can now traverse these areas mounted.

● Fixed the issue of being able to get out of Marni's Realm of the Orc Camp.

● Fixed the issue of the voice not playing when interacting with Islin Bartali.

● Applied the following changes to Photo Mode.
- Improved so that the Key Guide UI is not included when you take a screenshot.

● Fixed the warning text that is displayed on the Select Server and Change Server screens to now account for the Calpheon Elvia Server when entering an Elvia Server.

● Expanded choices so that "Hide nodes you've completed barter from" function in Barter screen can be used with ease.
● Added a pop up that shows when there are no rankings available in Ranking.
● Added a description that appears on the on the mount icon when there are no mount taken out.