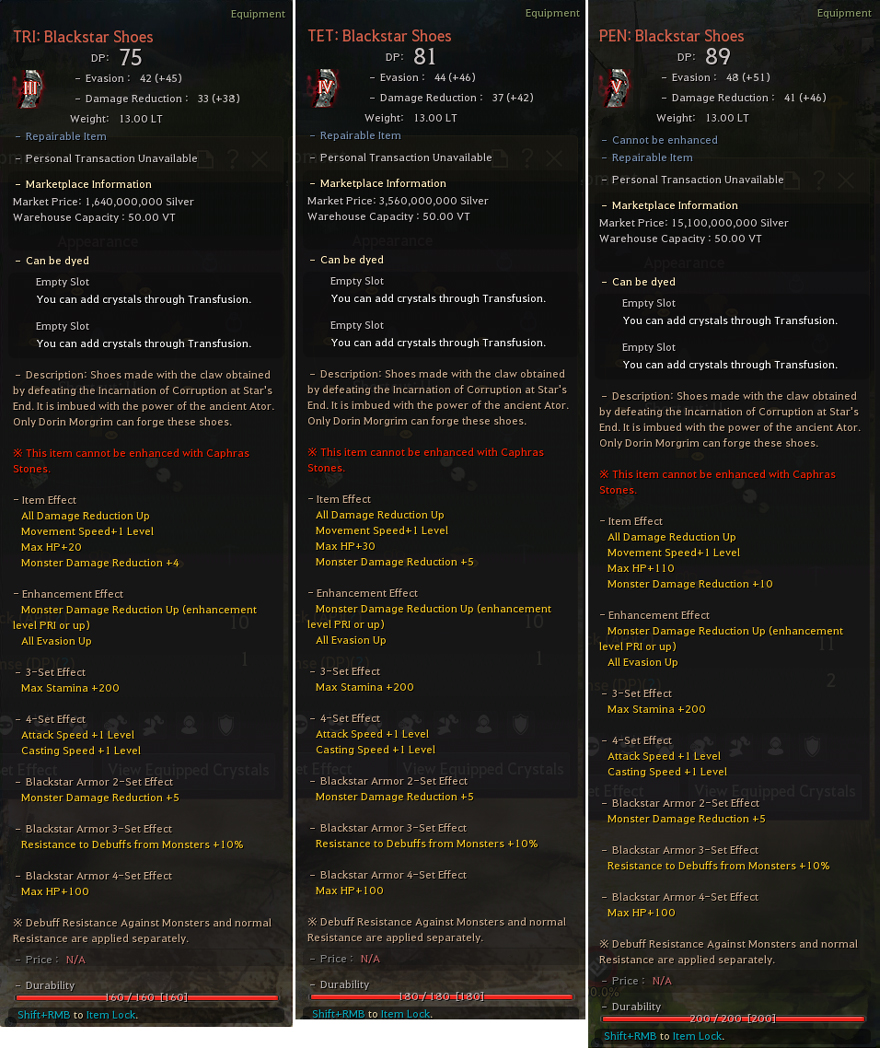 * Changes in Min & Max prices of Blackstar Shoes registered in the Central Market will be reflected faster than other gear for a 2-week period after April 14 (Wed) maintenance. 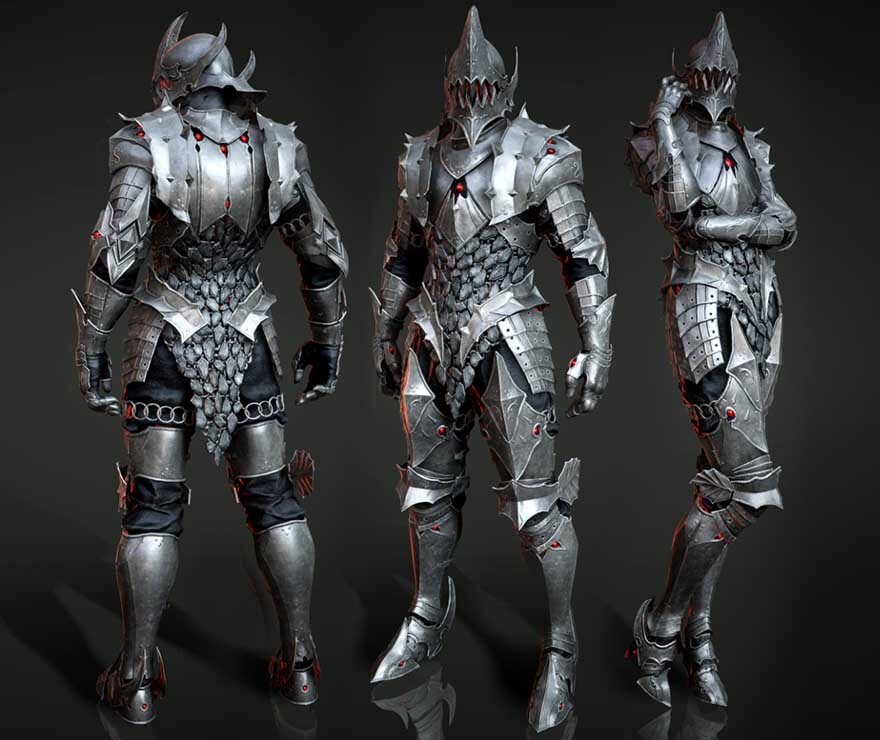 ● Detonative Flow - Fixed the issue where you couldn't combo straight to Flow: Magical Evasion and Teleport after using the skill.

● Fixed the issue where playing an instrument while under the effects of a debuff would cancel the debuff. 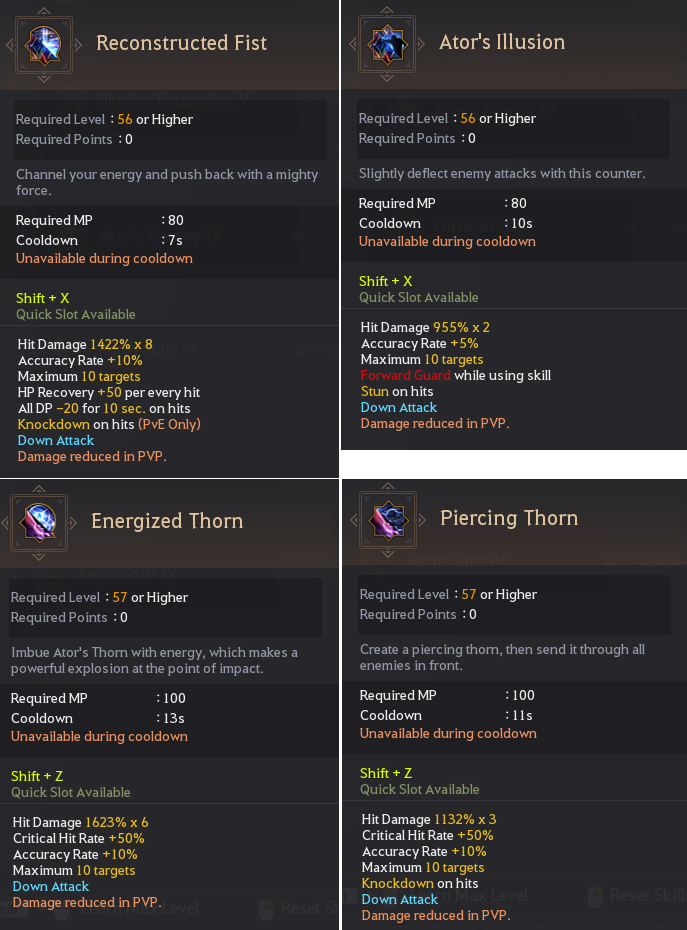 The enhanced skills for level 56 and 57 were released. The concept behind these skills was for Adventurers to pick between PvE or PvP focused skills. First, the level 56 enhanced skills. The PvE skill is Ator's Palm. It has a slow casting time but hits a large area with big damage. Then we have the PvP skill Ator's Illusion, which can stun opponents instantly. Next, the level 57 enhanced skills. Energized Thorn is a ranged skill ideal for PvE that hits a large area and melts enemies. On the other hand, we have Piercing Thorn. Like its name, it pierces through the enemies in its path and knocks them down. As for making improvements for Sage, we have changed some of the commands so you will be able to use the skills you intended to use instead of the Flow skills. You will also be pleased to hear that we are currently working hard on Sage's Awakening and will be revealing more soon. 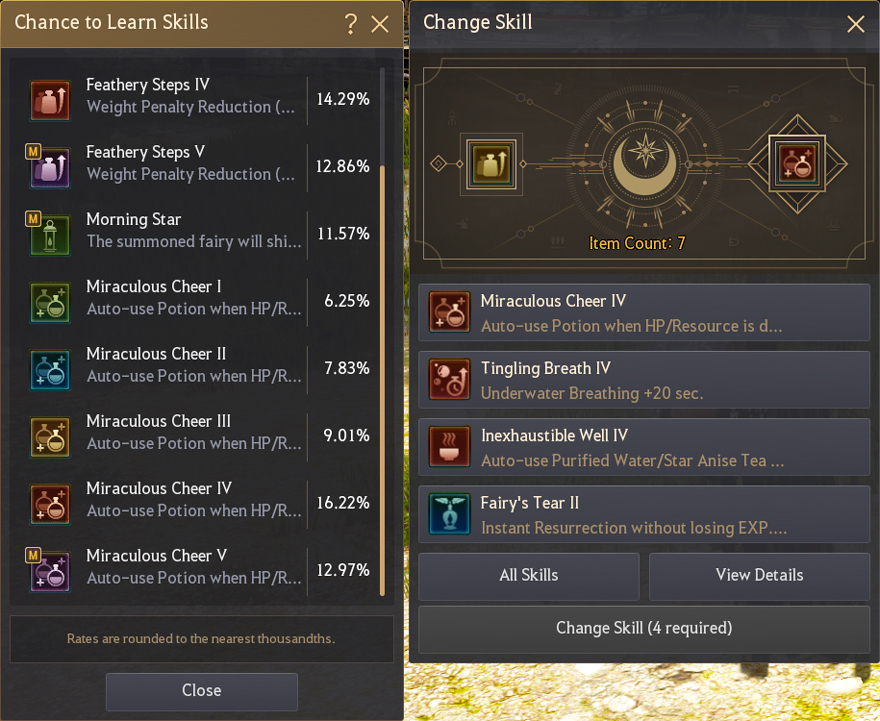 We added a feature that will allow you to view the probability of learning each skill when you use Theiah's Orb to change your fairy's skills. The probabilities shown were rounded up to the thousandths, and so may not add up to an even 100%. We are currently working to add the same feature to Mount Skill Change Coupons, Premium Horse Appearance Change Coupons, and Worker Promotion Completion as soon as possible.
● Changed World Bosses to no longer drop 'Response to Precious Courage' as loot.
● Added the following line to the item descriptions of [Mystic] Rakshande Armor and [Mystic] Rakshande Oufit Set:
- Equipping the cestus will make parts of the Rakshande Armor invisible.

● Islin Bartali, owner of the Lunar Halo Inn, seeks Adventurers who can help her cook huge portions to feed the diligent sailors of Velia.
- Added the quest '[Bonus] Cooking for Velian Sailors I.'
- This quest has 3 random variations, and you can complete it by talking to Islin Bartali. You can get either High-Quality Hot Pepper x500 or High-Quality Garlic x500 by completing it.
- You can get the quest by chance once you reach a certain cooking level for the dishes specified in the chart below. You can re-accept the quest immediately after completing it.

We added some bonus cooking quests that become available randomly while you are cooking. You can get High-Quality Garlic or High-Quality Pepper (ingredients that are hard to obtain but are required to cook certain dishes) as rewards from these quests. We hope that these quests, along with the bonus quests that reward you with Milk, Eggs, High-Quality Onions, and High-Quality Garlic, may be of help to many of our cooks in obtaining the ingredients they need.
● Some seasoned miners are talking about rumors of a special vein of ore you can discover while mining. You can get Rough Lustrous Gems by mining a special vein called 'Starlight Vein.' It was named as such for its beautiful sparkle.
- Starlight Veins can be discovered at a low chance while mining across all regions.
- The message 'You've discovered a Starlight Vein with your sharp miner's eyes!' will appear when you find it, and the vein will glow yellow around you.
- You can discover 3 - 5 Starlight Veins at a time, but the veins will disappear if you don't start mining them quickly.
- You can find additional Starlight Veins depending on your Gathering Mastery.
- You can hand over the Rough Lustrous Gem you obtained to a jeweler in each village for appraisal.
- However, you must have 200 amity with the jeweler NPCs to get an appraisal.
- You can find the NPCs above by searching for 'crystal' or 'jewel' in the Find NPC function left of the minimap.
● Added the chance to obtain the following items if you exchange Rough Lustrous Gem with the NPCs listed above.

There is now a chance that you will find glowing veins of ore while mining. You can obtain Rough Lustrous Gems from these veins called Starlight Vein. You may even be able to get special crystals that you can't get from normal mining if you take the Rough Lustrous Gem for an appraisal. We hope our mining Adventurers will enjoy these small strokes of luck, and that they will brighten up their day.
● Added a feature that allows you to check the route that requires the least amount of Contribution Points to connect two nodes.
- Use this feature by pressing the Connect Node Directly button in the bottom right corner of the World Map window.
- Search for the two nodes you want to connect, and you will be able to see the required Contribution points, energy, and other details.
- You can invest Contribution Points immediately in the nodes on your searched route if your Value Pack (Distant Node Investment) is in effect.
● The number of Total Likes for all Chat Groups will be reset on April 21 (Wed) maintenance.
- Adventurers who own either gold, silver, or bronze Black Spirit icons will receive a temporary title for 90 days for their diligent participation.
- Adventurers who own either gold, silver, or bronze Black Spirit icons in any of the 20 Hall of Adventurers Chat Groups will receive temporary titles as well.
- All Chat Group titles issued on Jan 20 (Wed) will be removed during the April 21 (Wed) maintenance.

● Fixed the issue where Al Rhundi summoned with the 'Al Rhundi's Secret Orders' at Castle Ruins in Elva Realm disappeared.

● Changed the text of the button that opens the gear UI in the enhancement UI to 'Show Equipped Gear'.
● Added an alert for when you can obtain Black Spirit's Adventure dice.

● Added a Check Duplicates feature for Character/Family/Guild names.
● Added more menus that can be added to the ring menu.

● Added a feature that allows you to view item tooltips in the ring menu settings window.
● Fixed the message about Contribution Point ranges displayed when you choose the NEW Olvia server so that it shows more clearly.

● Changed default velocity to 100 when composing.

● Changed the Wallpaper download page.
● Fixed the issue where thumbnail images would have black lines around the edges.
● Changed tablet view for Community, Beauty Album, and Photo Gallery so that more content could be displayed.
● Changed the usage history list at the bottom of the Acoin Purchase/Usage History page so that you can now view payment methods and payment sum per product.