Have you heard, Adventurers?

During this event, you’ll have DOUBLE the chance of obtaining Boss Gear from the World Bosses!

This includes not only just their respective Sealed Weapon Boxes, but also the incredibly powerful Hearts of Vell, Garmoth, and Karanda!

Event Details
① During the event, you’ll have DOUBLE the chance to obtain Boss Gear from the World Bosses!

▲ When a World Boss spawns, an alert message will appear at the top of your screen.

1. Anyone can participate in a World Boss raid when a World Boss appears at its spawn location. You can view their spawn times and locations below. 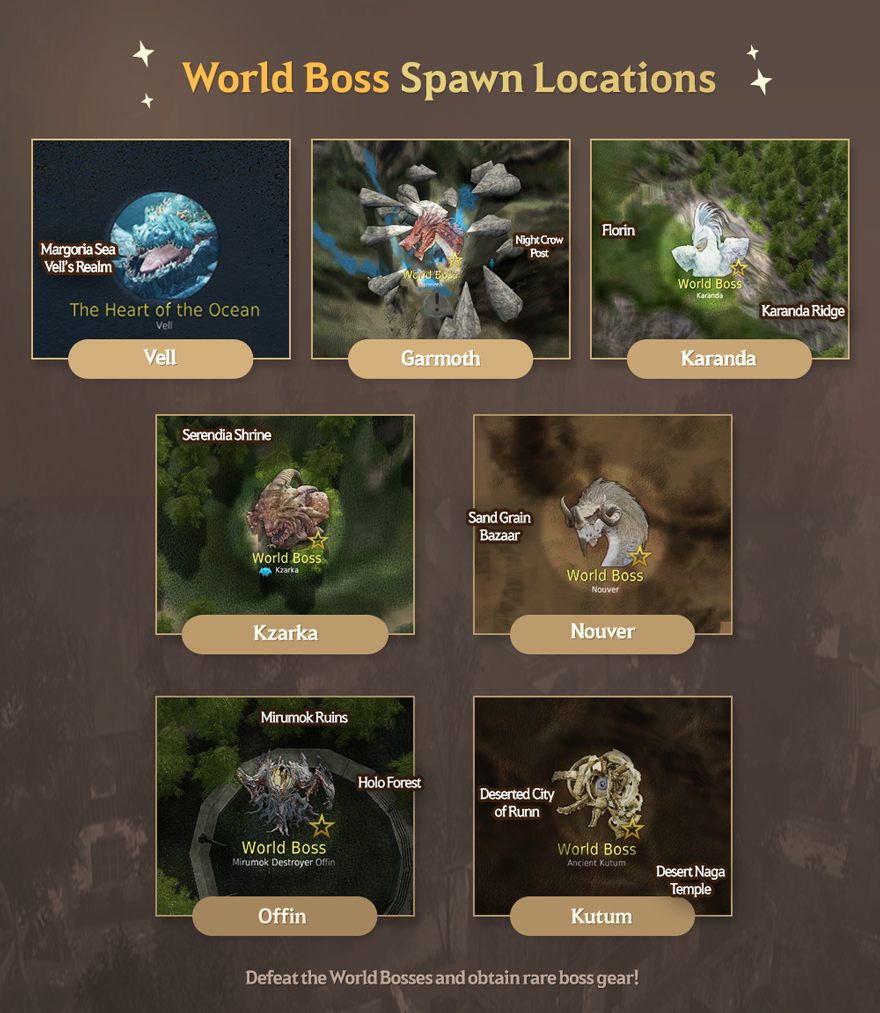 2. Before you head off to the World Boss, make sure you have sufficient AP/DP on your gear!

3. Beware! If you die to a World Boss, you’ll receive a death penalty!

4. If the World Boss isn’t defeated within 30 minutes, they will disappear.
- The HP of a World Boss is shared across all servers. Don’t worry if you don’t see your fellow Adventurers, you’re still fighting alongside them!

5. Once a World Boss is defeated, Adventurers will be given loot depending on several criteria, one of which is the “amount of damage dealt.” However, the “amount of damage dealt” is just one of the criteria, so you can still get the rarest items if you’re lucky.
- The “enhanced” versions of the World Boss require you to deal 0.01% of their HP (shared HP across all servers) as damage to obtain loot.

▲ Go to the in-game ESC menu → Boss Notification to receive alerts for the World Bosses!

③ The following gear obtainable from the World Bosses will have increased drop rates during the event.

* When you defeat Vell during the event, you will get either Vell Reward Bundle (Advanced) or Vell Reward Bundle (Intermediate) depending on your battle contribution.
* The drop rates of Nightmarish Kzarka, Bloodstorm Nouver and Thundercloud Kutum are not part of this event.
* The drops rate of the Storm Devoured Dandelion Weapon Box that you can obtain from Stormbringer Karanda is not part of this event.

* Additional Notices
- The World Boss spawn areas may include Combat Zones, so please pay close attention to your character’s safety. We are unable to provide any compensation or recovery assistance if you suffer losses due to normal in-game mechanics.
- Pearl Abyss reserves the right to change or cancel the event depending on mitigating circumstances. If changes are made, they can be found on this event page.
- Event items may have restrictions (sale/trade) and/or different binding settings/expiration dates. Due to this reason, these items cannot be transferred or restored.
- For details such as whether the item is bound, please refer to the in-game item description.
- Items and/or rewards that were used normally cannot be recovered.
- Participating in the event using inappropriate methods may result in a cancellation/retrieval of your reward(s) and/or restriction from the game.
Live Events
Worldwide Service Thank You Coupon
Start the Day with Daily Login Rewards
[Worldwide Service Celebration] Kakuo’s World Map
[Season] Get Your Season Enhancements Materials
Subscribe to Our Newsletter
BDOvision 2022
Anime Style Fanart Drawing Contest
Weekly Special Silver Products!
Summer 2022 Twitch Drops!
Adventuring Together
Summer's Special Login Rewards
[New & Returning] Season Challenges
Bag and Tag Lema Island Sealife
#BDOgraphy
Deals on Packages & Bundles
Heat Up with Hot Time
Capture Your Moment of Glory in the Arena of Solare
Rank Up in the Arena of Solare
New & Returning Adventurer Login Rewards 08 June
Celebrating the Arena of Solare
Milestone Gifts for New Adventurers
[Season: Drakania] Combat/Skill EXP Hot Time
Drakania Progression Rewards
Season Level-up Challenges
Season: Drakania Pass
Bored? Find Your Class!
Pearl Abyss x Blitzway: Dark Knight Figurine
Convenience Awaits with Black Desert+!
Daily Hot Time!